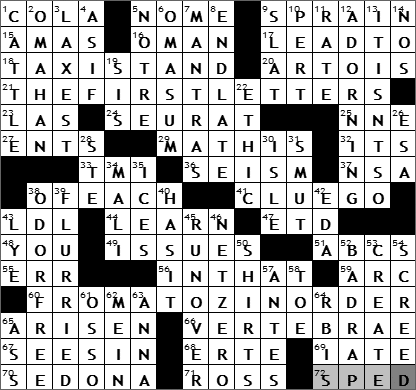 CROSSWORD SETTER: Tim Croce
THEME: ABC Clues … as the theme answers spell out “THE FIRST LETTER OF EACH CLUE GO FROM A TO Z IN ORDER” … and they do!


Today’s Wiki-est, Amazonian Googlies
Across
5. Bering Sea port : NOME
Nome, Alaska has over 3,500 residents, the majority of whom are Native American. The next largest ethnic group is the white population.

Domitian was the Emperor of Rome from 81 to 96 AD, less famous than his brother Titus who ruled before him, for only two years.

16. Eastern sultanate : OMAN
Oman lies on the southeast coast of the Arabian Peninsula, neighbored by the OAE, Saudi Arabia and Yemen. Oman is a Sultanate, headed by a hereditary sultan. The current head of state is Qaboos bin Said Al Said. He rules with the help of an elected advisory council (instituted in the early nineties), but here are no legal political parties.

20. Historical region of France : ARTOIS
Artois was a province in Northern France, right on the coast next to the Strait of Dover.

23. Jalisco article : LAS
Jalisco is a state on the central-west coast of Mexico. The capital city of Jalisco is Guadalajara.

24. Kröller-Müller Museum artist : SEURAT
Georges Seurat was a French Post-Impressionist. His most famous work, in the pointillist style, can be viewed in the Art Institute of Chicago, “A Sunday Afternoon on the Island of La Grande Jatte – 1884”. If you’ve seen the movie “Ferris Bueller’s Day Off”, it features quite prominently in a wonderful, wonderful scene shot at the gallery.

27. Middle-earth creatures : ENTS
Ents are those tree-like creatures that live in J. R. R. Tolkien’s Middle-earth, in his series of books “The Lord of the Rings”.

29. “No Love (But Your Love)” singer, 1958 : MATHIS
Johnny Mathis had to face a tough choice in 1956. He was a talented high jumper in college and was invited to try out for the US Olympic team destined for the Melbourne Games. At the same time he was scheduled to make his first recordings, in New York. He opted to go to the Big Apple.

32. Often-misused possessive : ITS
There’s no apostrophe in “its” when “it’s” used as a possessive, only when “it’s” an abbreviation for “it is”. And I make that mistake all the time …

37. “Red Storm Rising” grp. : NSA
“Red Storm Rising” is the best of Tom Clancy’s novels, in my humble opinion. It tells of a Third World War that breaks out between NATO and the Warsaw Pact countries. Although the cover of the book usually shows just Tom Clancy as the author, it was actually co-written by Larry Bond.

43. Under 100 mg per deciliter of this is considered optimal : LDL
LDL (low-density lipoprotein) is one of the compounds responsible for transporting fats around the body. When combined with cholesterol it can be referred to as “bad cholesterol” as it can build up on the inner walls of blood vessels leading to atherosclerosis.

48. Xavier Cugat film “___ Were Never Lovelier” : YOU
Xavier Cugat was an American bandleader born in Spain, who arrived in the United States via Cuba. He worked in Hollywood on movies, although he was also in charge of the Hotel Orchestra in the Waldorf Astoria in New York City, for 16 years. Famously he conducted using just one arm, as he would hold his pet Chihuahua in the other. His fourth marriage was to comic actress, Charo, in the first marriage ceremony ever to take place in Caesar’s Palace.

“Us Weekly” is a celebrity gossip magazine, first published in 1977.

55. Act humanly : ERR
Alexander Pope’s 1709 poem “An Essay on Criticism” is the source of at least three well-known quotations:

66. Facet joints connect them : VERTEBRAE
The facet joints are on either side of the vertebrae in the spine. Such a joint is also known as a zygapophysial joint. That might easier to remember …

68. Harper’s Bazaar illustrator of the 1910s-’30s : ERTE
Erte was the pseudonym of French artist (Russian born) Romain de Tirtoff. Erte is the French pronunciation of his initials “R.T.”

71. Katharine of “The Graduate” : ROSS
The actress Katharine Ross is best known for two major roles, playing Elaine Robinson in “The Graduate”, and Etta Place in “Butch Cassidy and the Sundance Kid”. Ross is married to the actor Sam Elliott. Although the couple both appeared in “Butch Cassidy …” , in different scenes, they didn’t actually meet and start dating until 1978, almost ten years later.

Down
2. Native Nebraskan : OMAHAN
Omaha is the largest city in the state of Nebraska. When Nebraska was still a territory, Omaha was its capital, but when Nebraska achieved statehood the capital was moved to the city of Lincoln.

4. “Pshaw!,” to a Valley girl : AS IF
The original “valley girls” were the young, middle-class females living in San Fernando Valley in Southern California.

5. Québécois’s “our” : NOTRE
A “Québécois” is someone from Quebec.

6. Ruminant’s third stomach : OMASUM
The third compartment of the stomach of ruminant animals is known as the “omasum”. It is sometimes called the “bible”. The lining of a cow’s stomach is eaten in some parts of the world, as tripe (I’ve had it once, and wouldn’t dream of having it ever again). From this practice, the omasum became known as the “butcher’s bible”. This is because the lining of the omasum has many leaf-like folds, like the pages of a book. And that, apparently, is where the nickname comes from.

7. Sacred words repeated in prayer : MANTRAS
A “mantra” is a word that is used as a focus for the mind while meditating.

14. ZIP codes, e.g.: Abbr. : NOS
ZIP codes were introduced in 1963. The acronym ZIP stands for Zone Improvement Plan, a name indicating that mail travels more efficiently when the codes are included in the postal address.

30. Elba, for one : ISLE
I had a lovely two-week vacation in Tuscany once, including what was supposed to be a two-night stay on the island of Elba. I had envisioned Elba as a place full of history, and maybe it is, but it is also overrun with tourists who use it as a beach getaway. We left after one day and we won’t be going back …

34. Guinea’s neighbor to the northeast : MALI
The Republic of Mali is a landlocked country in western Africa, south of Algeria. The country’s most famous city is … Timbuktu …

39. Just left a dusting, say : FLURRIED
Our word “flurry” ultimately comes from the Middle English word “flouren”, meaning “to sprinkle”, as with flour.

42. LeShan who wrote child-care books : EDA
Eda LeShan wrote “When Your Child Drives You Crazy”, and was host of the television show “How Do Your Children Grow?” on PBS.

46. Online option since 1998 : NETZERO
NetZero was launched in 1998, the first free Internet Service Provider. NetZero’s idea was to provide targeted advertising to users, based on what users liked to view online. It’s a little like Google’s business model, providing advertising based on Internet surfing patterns.

54. Speech that harangues : SCREED
A screed is a long speech or piece of writing, usually full of emotion.

61. Veal dish ___ bucco : OSSO
Osso is the Italian word for bone, as in the name of the dish “Osso Bucco”, braised veal shanks.

63. “X-Men” actress Paquin : ANNA
Anna Paquin is an actress from New Zealand, who won an Oscar as an 11-year-old for her role in “The Piano”. In the HBO series “True Blood” she plays Sookie Stackhouse, a role for which she won a Golden Globe.

64. Yount had 1,406 of them : RBIS
Robin Yount is a former major League shortstop and center fielder, playing his whole career with the Milwaukee Brewers. His brother Larry had a pretty amazing career. He hurt his arm in a warm-up toss before his first appearance in the Majors. He couldn’t play that day, and never made a pitch in a Major League game. Has to be the shortest baseball career known.