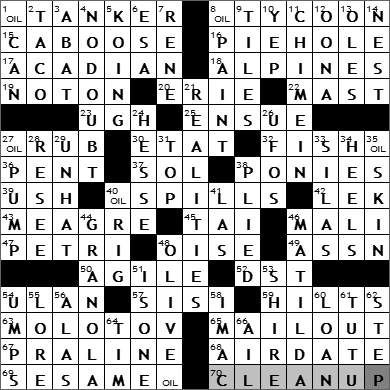 CROSSWORD SETTER: Ian Livengood
THEME: CLEAN UP … this is a rebus puzzle with the letters OIL filling six squares. If you CLEAN UP the 12 answers using the word OIL (i.e. remove the OIL) then the shorter answers still match their respective clues:

8. Getty, e.g. : OIL TYCOON
Jean Paul Getty was famous as an industrialist, but also as a grandfather who had a grandson kidnapped for ransom. John Paul Getty III was 16 years old when he was taken in Rome in 1973. The ransom demand to his father was for $17 million, a sum that he had to ask from the child’s grandfather, as he was the one with all the money. Jean Paul Getty refused to pay and 4 months later an envelope was delivered to the family containing a lock of hair and an ear. The grandfather then entered into negotiation with the kidnappers, beat them down to $2 million, and the boy was released. Getty’s grandson never really recovered. He got into drugs, and an overdose left him speechless, blind and paralyzed. Sad story …

15. Rear end : CABOOSE
The word “caboose” originally came from Middle Dutch, the word for a ship’s galley. When the last car in a train in North America was given a stove for the comfort of the crew, it took on the name “caboose”.

16. Trap : PIE HOLE
The term “pie hole” meaning “mouth” has been in use since the early 1980s. It is a variation of the older term “cake hole” that originated with the British armed forces during WWII. “Cake hole” is still used in the British Isles, with “pie hole” largely limited to North America.

17. Early French settler in North America : ACADIAN
The great explorer Verrazzano gave the name “Arcadia” to the coastal land that stretched from north of present day Virginia right up the North American continent to Nova Scotia. The name Arcadia was chosen as it was also the name for a part of Greece that had been viewed as “idyllic” from the days of classical antiquity. The “Arcadia” name quickly evolved into the word “Acadia” that was used locally here in North America. Much of Acadia was settled by the French in the 1600s, and then in 1710 Acadia was conquered by the British. There followed the French and Indian War after which there was a mass migration of French Acadians, often via the French colony of Saint-Dominique (present-day Haiti) to the French colony of Louisiana. The local dialectic pronunciation of the word “Acadian” was “Cajun”, giving the name to the ethnic group for which Louisiana has been home for about 300 years.

20. City that’s home to the U.S. Brig Niagara : ERIE
The USS Niagara is a warship that was used in the War of 1812, serving in the Battle of Lake Erie. You can visit it today in the city of Erie, Pennsylvania, where it is docked behind the Erie Maritime Museum.

30. Ministre d’___ : ETAT
“Ministre d’État” is French for “Minister of State”. A Minister of State is not the equivalent of the US Secretary of State, as one might perhaps presume. In most countries, a minister of state is the name given to any junior minister, one reporting to a cabinet minister.

32. Fatty acid source : FISH OIL
Fish oils are noted for containing omega-3 fatty acids, which have many health benefits including the reduction of inflammation. Like so many essential nutrients that we get from animals, the only reason the animal has them is that it feeds on plants. In this case, fish cannot manufacture omega-3 fatty acids, and instead absorb them from algae. Omega-3 fatty acids are also readily found in other plant oils such as flaxseed oil.

42. Albanian money : LEK
The official currency of Albania is called the lek. The first lek was introduced in 1926, and was apparently named after Alexander the Great.

43. Scanty, in Salisbury : MEAGRE
Salisbury is the only city in the the county of Wiltshire, in England. It sits at the edge of Salisbury Plain, home of the famous Stonehenge.

46. Country where Bambara is the main spoken language : MALI
The Republic of Mali is a landlocked country in western Africa, south of Algeria. The country’s most famous city is … Timbuktu …

47. Kind of dish : PETRI
Julius Richard Petri was a German bacteriologist, and the man after whom the Petri dish is named. The petri dish can have an agar gel on the bottom which acts a nutrient source for the specimen being grown and studied, in which case the dish plus agar is referred to as an “agar plate”.

48. Seine feeder : OISE
The River Oise rises in Belgium and joins up with the River Seine just outside Paris.

49. Part of N.C.A.A.: Abbr. : ASSN
The National Collegiate Athletic Association (NCAA) dates back to the Presidency of Theodore Roosevelt. When President Roosevelt’s son broke his nose playing football at Harvard, Roosevelt turned his attention to the number of serious injuries and even deaths occurring in college sports. He instigated meetings between the major educational institutions, leading to the formation of the Intercollegiate Athletic Association of the United States in 1906 with the remit of regulating college sports. The IAAUS evolved into the NCAA in 1910.

52. “Spring forward” hrs. : DST
On the other side of the Atlantic, Daylight Saving Time (DST) is known as “summer time”. The idea behind summer/daylight-savings is to move clocks forward an hour in spring and backwards in the fall, so that afternoons have more daylight.

54. ___ Bator : ULAN
The name “Ulan Bator” translates from Mongolian as “the Red Hero”, and is Mongolia’s capital city. Ulan Bator lies north of the Gobi Desert.

63. Eponymous associate of Stalin : MOLOTOV
Vyacheslav Molotov was a prominent Soviet politician and protégé of Joseph Stalin. During the Winter War of WWII, between the Soviet Union and Finland, Molotov claimed in radio broadcasts that Finland was not being bombed, but rather that the Soviet Union was dropping food to relieve famine. With a sense of irony, the Finns started to call the Soviet bombs “Molotov bread baskets”. The Finns also improvised incendiary bombs using bottles and a gasoline-based fuel, and called these devices “Molotov cocktails”, a name that persists to this day.

67. Nutty confection : PRALINE
A praline is a candy made made out of nuts and sugar syrup. The first pralines were made in France in the 17th century for an industrialist named Marshal du Plessis-Praslin, who gave his name to the confection.

12. Wife of Charlie Chaplin : OONA
Oona O’Neill dated J. D. Salinger and Orson Welles in her teens, but ended up marrying Charlie Chaplin. She was still pretty young when she married Chaplin, much to the dismay of her famous father, the playwright Eugene O’Neill. After the marriage, Eugene disowned Oona as he was pretty upset that 54-year-old Chaplin could marry his 18-year-old daughter.

13. World Cup sounds : OLES
“Ole Ole Ole!” is chanted at soccer games by many Spanish-speaking (or -shouting!) fans. I am very proud to claim that the fans of the Irish national team have adopted the chant as their own, and it can be heard practically non-stop when Ireland is playing (with some inventive melody behind it!).

24. “Steppenwolf” novelist : HESSE
Hermann Hesse was not only a novelist, but also a poet and a painter. His best known work is probably his 1927 novel “Steppenwolf”.

26. Astounding Stories subjects : UFOS
The science fiction magazine called “Astounding Stories” was first published in 1930. It has been renamed a few times but is still around today, issued under the title “Analog Science Fiction and Fact”.

46. Young Roald Dahl title character : MATILDA
Roald Dahl’s name is Norwegian. Dahl’s parents were from Norway, although Dahl himself was Welsh. Dahl became one of the most successful authors of the twentieth century, and a couple of his most famous titles are “James and the Giant Peach” and “Charlie and the Chocolate Factory”.

53. County abroad : SHIRE
The word “shire” comes from the Old English “scir” meaning “administrative district”. The term was replaced with county as far back as the 14th century, but the usage still persists to this day, largely because some counties retain the use of -shire as a suffix (Yorkshire, Lancashire etc.).

58. Apple product : IMAC
The iMac is a desktop computer platform from Apple, introduced in 1998. One of the main features of the iMac is that it is an “all-in-one” design, with the computer console and monitor integrated.

61. Article to take a spin in? : TUTU
The word “tutu”, used for a ballet dancer’s skirt, is actually a somewhat “naughty” term. It came into English from French in the early 20th century. The French “tutu” is an alteration of the word “cucu”, a childish word for “cul” meaning the “bottom, backside”.

64. Tebow who won the 2007 Heisman Trophy : TIM
Tim Tebow is a quarterback playing for the Denver Broncos. He was the first college sophomore to win the Heisman Trophy.