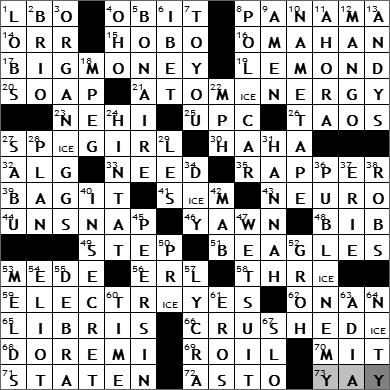 CROSSWORD SETTER: Paula Gamache
THEME: CRUSHED ICE … the letters I-C-E are “crushed” together and placed into some of the squares in the answer grid.
COMPLETION TIME: 21m 14s
ANSWERS I MISSED: 0


Today’s Wiki-est, Amazonian Googlies
Across
1. Wall St. deal : LBO
A leveraged buyout (LBO) is a transaction in which an investor acquires a controlling volume of stock in a company, but buys that stock with borrowed funds (hence “leveraged”). Often the assets of the acquired company are used as collateral for the borrowed money. There is a special form of LBO known as a management buyout in which the company’s own management team purchases the controlling interest.

8. ___ City, Fla. : PANAMA
If you draw a straight line between Chicago and Panama City, Panama, it passes through Panama City, Florida. For some reason, this was why the developer gave the name to the Florida City.

14. Two-time Art Ross Trophy winner : ORR
Bobby Orr is regarded as one of the greatest hockey players who ever played the game. By the time he retired in 1978 he had undergone over a dozen knee surgeries. At 31 years of age, he concluded that he just couldn’t skate any more. Reportedly, he was even having trouble walking …

15. One who’s left holding the bag? : HOBO
No one seems to know for sure how the term “hobo” originated, although there are lots of colorful theories. My favorite is that “hobo” comes from the first letters in the words “ho-meward bo-und”, but it doesn’t seem very plausible. Hobos differed from “tramps” and “bums”, in that “bums” refused to work, “tramps” worked when they had to, while “hobos” traveled in search of work.

16. Warren Buffett, by birth : OMAHAN
Warren Buffett is one of my heroes. Despite being the third wealthiest man in the world, he lives a relatively frugal and modest life. He also has a very Jeffersonian attitude towards the role his wealth plays within his family. He has set up his estate so that his children get enough money to be independent, but the vast majority of his assets are going to charity both before and after he dies.

19. Three-time Tour de France winner : LEMOND
Greg LeMond is a native of Reno, Nevada, and a three-time winner of the prestigious Tour de France. In fact, in 1986 he was the first American to win the race.

26. City or county of New Mexico : TAOS
Taos Ski Valley is a resort village in New Mexico, founded in 1955. About twelve families live there, making up thirty or so households and a population of about 60 people. It is said to very much resemble a Swiss village, and even includes an elected village council.

27. Member of a 1990s pop quintet : SPICE GIRL
The five members of the English pop group the Spice Girls are:

41. Canine command : SIC ‘EM
Sic ’em is an attack order given to a dog, instructing the animal to growl, bark or even bite. The term dates back to the 1830s, with “sic” being a variation of “seek”.

43. Prefix with science : NEURO-
Neuroscience is the study of the human nervous system and the brain.

48. Dribble guard : BIB
The word “bib” comes form the Latin “bibere” meaning “to drink”, as does our word “imbibe”. So, it’s less about spilling the food, and more about soaking up the booze …

51. White House pair in the 1960s : BEAGLES
“Him” and “Her” were two beagles owned by President Johnson and his family while they were living in the White House. Her died after only a year when she swallowed a stone. Him died at three-years-old when he was hit by a car while chasing a squirrel across the White House lawn.

53. Ancient Persian : MEDE
The Medes were an ancient people that lived in what is now northwestern Iran. The Medes held sway in the region only for about 60 years, until Cyrus the Great came along and defeated Astyages, the king of Media (not to be confused with Howard Stern, the self-claimed “king of all media”!).

56. Goethe’s “The ___-King” : ERL
“Der Erlkönig” (“The Erl King”) is a poem by Goethe. The poem tells of the death of child attacked by the Erl King, a supernatural being.

58. “___ the brinded cat hath mew’d”: “Macbeth” : THRICE
In Shakespeare’s “Macbeth”, the witches cast a spell, starting with the lines:

Thrice the brinded cat hath mew’d.
Thrice and once, the hedge-pig whin’d.

59. Photocells : ELECTRIC EYES
The “electric eye” with which most of us are familiar is the light detector at one side of our electric garage-door opener. At the other side of the door is an emitter which sends a beam of infrared or visible light that the electric eye has to “see” in order for the door to close.

65. Ex ___ : LIBRIS
The Latin phrase “ex libris” translates as “from the books”. Ex libris might be written on a book to indicate ownership, as in “from the library of …”

No one seems to know where the term “moolah” comes from, but it has been around since the 1920s.

70. Campus on the Charles: Abbr. : MIT
The Massachusetts Institute of Technology moved into its magnificent mile-long campus on the Cambridge side of the Charles River in 1906. The campus was built largely with funds donated by George Eastman, the founder of the Eastman Kodak Company.

71. ___ Island : STATEN
Staten Island is part of New York City, and is the least populous of the the city’s five boroughs. The island was originally called Staaten Eylandt by Henry Hudson, after the Dutch parliament’s name, the Staaten Generaal.

Down
2. Liveliness : BRIO
Brio is borrowed from Italian, in which language it means vigor and vivacity. “Con brio” is a musical direction often found on a score, instructing the musicians to play “with energy, vigor”.

5. Neighbor of Aruba : BONAIRE
Bonaire is one of the so-called ABC Islands. The ABC Islands is the nickname given to the three western-most islands of the Leeward Antilles in the Caribbean. The nickname comes from the first letters of the island names: Aruba, Bonaire and Curaçao. All three of the ABC Islands are part of the Kingdom of the Netherlands.

7. End of a “happy birthday” message : TO YOU
Do you think you know the names of the three most popular songs sung in English? According to the “Guinness Book of Records” they are, in order:

13. Some boy dolls : ANDYS
Raggedy Andy was introduced as the brother to Raggedy Ann in the 1920 book “Raggedy Andy Stories”.

Raggedy Ann is a rag doll, created by Johnny Gruelle in 1915 for his daughter, Marcella. He decided to name the doll by combining the titles of two poems by James Whitcomb Riley, “The Raggedy Man” and “Little Orphan Annie”. Gruelle introduced Raggedy Ann in a series of books three years later. Sadly, Marcella died at 13 years of age with her father blaming a smallpox vaccination she was given at school. Gruelle became very active in the movement against mass vaccination, for which Raggedy Ann became a symbol.

18. Compressed video file format : MPEG
The Moving Picture Experts Group (MPEG) was established in 1988 to set standards for audio and video compression. The standards they’ve come up with use the acronym MPEG.

27. “Elephant Boy” boy : SABU
The 1937 British film “Elephant Boy” starred a young Indian, elephant driver called Sabu Dastagir. Sabu (he was often known just by the one name) made more British films over the next few years, including “The Thief of Baghdad” in 1940 and the 1942 version of “The Jungle book”. Sabu moved to Hollywood, and became a US citizen in 1944. He joined the US Army Air Forces and served as a tail gunner in the Pacific, and was awarded the Distinguished Flying Cross for valor and bravery. Sadly, in 1963 Sabu died of a heart attack, at only 39 years of age.

31. Mrs. Van Buren : HANNAH
Hannah Van Buren was one of four First Ladies who had actually passed away before their husbands became US President. Martin Van Buren never remarried after Hannah died and so his daughter-in-law acted as the unofficial First Lady of the White House.

37. Buffalo’s county : ERIE
Buffalo is the second most-populous city in the state of New York. The city takes its name from Buffalo Creek that runs though the metropolis (although it is called Buffalo River within the city). The source of the name Buffalo for the creek is the subject of much speculation, but one thing is clear, there were never any bison in the area.

42. Queen in Shelley’s poetry : MAB
In Shakespeare’s “Romeo and Juliet”, Mercutio refers to the fairy known as Queen Mab. It seems that Queen Mab was Shakespeare’s creation, although she became popular in subsequent works of literature. For example, she is referred to in Herman Melville’s “Moby Dick”, in Jane Austen’s “Sense and Sensibility”, and Percy Bysshe Shelley wrote a large poetic work called “Queen Mab: A Philosophical Poem”.

50. Part of C.P.I. : PRICE
The Consumer Price Index (CPI) measures changes in the price of services and goods purchased by households. The United States CPI fell in 2009, for the first time since 1955. That’s how bad the recession was two years ago …

52. Actor David of “Rhoda” : GROH
David Groh played Joe Gerard on “The Mary Tyler Moore Show” and on “Rhoda”. Joe is the character married to Rhoda.

54. “Adam Bede” novelist : ELIOT
“Adam Bede” was the first novel written by the English writer George Eliot (aka Mary Ann Evans). It was published in 1859 and has been in print since then, over 150 years.

55. Messing on the screen : DEBRA
I always felt that the real stars of “Will & Grace” were Jack (played by Sean Hayes) and Karen (played by Megan Mullally). Eric McCormack and Debra Messing portrayed the title characters.

57. Elastic fiber : LYCRA
What we call spandex in the US is known as Lycra in the British Isles. “Spandex” was chosen as the name for the elastic fiber as it is an anagram of “expands”.

61. Love child? : EROS
As always seems to be the case, the Greek gods Eros and Aphrodite have overlapping spheres of influence. Aphrodite was the goddess of love between a man and a woman, but Eros was the god who stirred the passions of the male.

63. 1998 Sarah McLachlan hit : ADIA
Apparently the song “Adia”, co-written by Sarah McLachlan, was written as an apology to her best friend … for stealing her ex-boyfriend, and then marrying him!