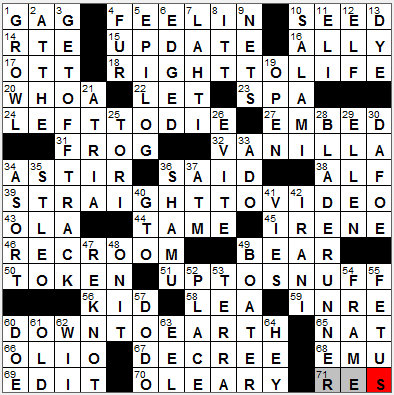 CROSSWORD SETTER: Milo Beckman
THEME: Directions To … all of the theme answers are in the format “direction to something”:

18A. Anti-abortion position : RIGHT TO LIFE
24A. Abandoned, in a way : LEFT TO DIE
39A. Not shown in theaters : STRAIGHT TO VIDEO
51A. Satisfactory : UP TO SNUFF
60A. Having no illusions or pretensions : DOWN TO EARTH

23. Place to get a facial : SPA
The word “spa” migrated into English from Belgium, as Spa is the name of a health resort there. The name “Spa” comes from the Walloon word “espa” meaning “spring, fountain”.

27. Incorporate, as a picture in a blog : EMBED
“Blog” is a melding of the words “Web” and “log”. This blog that you’re reading is a “log” of all the New York Times Crosswords published, and I post them on the “Web”.

31. Kermit, e.g. : FROG
Kermit has to be the most readily recognized puppet character created by the late great Jim Henson. Henson came up with Kermit way back in 1955 when he appeared on a puppet show called “Sam and Friends” that aired in Washington, D.C. Kermit is loved so much that he even has his own star on the Hollywood Walk of Fame.

38. Landon who lost to F.D.R. in 1936 : ALF
Alf Landon was the Governor of Kansas from 1933-37, and was the Republican Party’s nominee against FDR in the 1936 Presidential election. He is remembered as the candidate who “disappeared” after winning the nomination. He rarely traveled during the campaign, and made no appearances at all in its first two months. FDR famously won by a landslide, with Landon only winning the states of Maine and Vermont. He wasn’t even able to carry his home state of Kansas.

43. Suffix with plug : -OLA
“Plugola” is the public promotion of something in which the promoter has a financial interest, without disclosing that interest. Plugola is similar to “payola” in that it is a form of promotion, but unlike payola, it’s perfectly legal.

Payola is the illegal practice of paying radio stations or disk jockeys to repeatedly play a particular piece of music. The impetus behind the crime is that the more often a song is played, the more likely it is to sell. The term “Payola” comes from the words “pay” and “Victrola”, an RCA brand name for an early phonograph.

44. Not feral : TAME
“Feral”, meaning existing in a wild or untamed state, comes from the Latin word “fera” meaning “a wild animal”.

45. 2000 comedy “Me, Myself & ___” : IRENE
“Me, Myself & Irene” is a 2000 comedy film starring Jim Carrey (“Me” and “Myself”) and Renée Zellweger (Irene). It’s a perfect vehicle for Carrey, as his character is a state trooper who develops a second personality after a psychotic breakdown. You can just imagine how Jim Carrey plays that extra, unrepressed persona!

49. Wall Street pessimist : BEAR
The terms “bull” and “bear” markets come from the way in which each animal attacks. A bull thrusts his horns upwards (an “up” market), whereas a bear swipes with his paws downward (a “down” market).

51. Satisfactory : UP TO SNUFF
The term “up to snuff” today means “up to standard”. It was introduced to us for the first time in 1811 in a play called “Hamlet Travestie” by Englishman John Poole. He used the term to mean “in the know”. It was perhaps a reference to the habit of taking powdered tobacco, a practice back then that was associated with the upper classes, the educated, those in the know.

65. Singer ___ King Cole : NAT
Nat King Cole’s real name was Nathaniel Adams Coles. Cole made television history in 1956 when his own show debuted on NBC, a first for an African-American. Cole couldn’t pick up a national sponsor, so in order to save money and possibly save the show, many guest artists worked for no fee at all – the likes of Ella Fitzgerald, Harry Belafonte and Peggy Lee. The show survived for a year, but eventually Nat King Cole had to pull the plug on it himself.

66. Little of this and that : OLIO
Olio is a term meaning a hodgepodge or a mixture, coming from the mixed stew of the same name. The stew in turn takes its name from the Spanish “olla”, the name of the clay pot used when cooking the stew.

68. Big Australian bird : EMU
The emu has had a tough time in Australia since man settled there. There was even an “Emu War” in Western Australia in 1932 when migrating emus competed with livestock for water and food. Soldiers were sent in and used machine guns in an unsuccessful attempt to drive off the emus. The emus were clever, breaking their usual formation and adopting guerrilla tactics, and operated as smaller units. After 50 days of “war”, the military withdrew. Subsequent requests for military help for the farmers were ignored. The emus had emerged victorious …

70. Mrs. with a famous cow : O’LEARY
The Great Chicago Fire blazed for almost three full days in October of 1871. By the time it was extinguished hundreds of people had died and four square miles of the city had been destroyed. It is known that the fire started in or near a small barn owned by an Irish immigrant, a Mrs. Catherine O’Leary. A reporter called Michael Ahern wrote in the “Chicago Tribune” that the fire was ignited when a cow in the barn kicked over a lantern. Years later, Ahern admitted that he made up the story about the cow and the lantern, as he felt it made colorful copy. Supposedly Mrs. O’Leary died a heart-broken woman as she spent the rest of her life with the public blaming her on the tragic loss of life and property.

2. “Casey ___ Bat” : AT THE
“Casey at the Bat” is a poem written in 1888 by Ernest Thayer, first published in the San Francisco Examiner. The poem became very popular due to repeated live performances in vaudeville by DeWolf Hopper. Casey played for the Mudville Nine, and the last line of the poem is “But there is no joy in Mudville – mighty Casey has struck out.”

4. Wearing this is a PETA peeve : FUR
People for the Ethical Treatment of Animals (PETA) is a very large animal rights organization, with 300 employees and two million members and supporters worldwide. Although the group campaigns for animal rights across a broad spectrum of issues, it has a stated focus in opposition of four practices:

5. Afterword : EPILOG
Our word “epilog”, meaning an addition at the end of a play or other literary work, ultimately comes from Greek. “Epi-” is a prefix signifying “in addition”, and “logos” is the noun for “a speech”.

7. Christine of “Chicago Hope” : LAHTI
Christine Lahti is an actress probably best known for playing Dr. Kate Austin on the TV medical drama “Chicago Hope”. If you read “The Huffington Post” you might run across her as well, as Lahti is a contributing blogger.

8. Hairy TV cousin : ITT
In the television sitcom “The Addams Family”, the family had a frequent visitor called Cousin Itt. Itt is a short man, with long hair that runs from his head to the floor. Itt was played by Italian actor Felix Silla.

10. Deli meat : SALAMI
Salame (note the “e” at the end) is an Italian sausage that is traditionally associated with the peasant classes. The meat in the sausage is preserved with salt, and it can be hung and stored for maybe as long as ten years. The name “salame” comes from “sale”, the Italian word for salt, and “-ame”, a suffix indicating a collective noun. Our English word “salami” is actually the Italian plural for “salame”.

11. Football’s Manning : ELI
Even I know that Eli Manning, and his older brother Peyton, are both quarterbacks!

12. Rice Krispies’ Snap, Crackle or Pop : ELF
The three elves Snap, Crackle and Pop are the mascots for Kellogg’s Rice Krispies. They first appeared in an ad campaign in 1933, although the phrase “snap, crackle and pop” had been used for the cereal before then in a radio commercials. By the way, instead of Rice Krispies, the elves promote “Rice Bubbles” in Australia, and the elves are called “Cric!, Crac! and Croc! in Quebec.

19. “___ sesame” : OPEN
In the Arabic tale “Ali Baba and the Forty Thieves”, the magical cave entrance is opened with the words “Open, Simsim”, but this mutated into “Open Sesame” in European translations.

25. Doughnuts, topologically speaking : TORI
A torus is a doughnut shape.

RSVP stands for “Répondez s’il vous plaît”, which is French for “please, answer”.

28. 1982 Harrison Ford sci-fi film : BLADE RUNNER
“Blade Runner” is a cult classic, a sci-fi film made in 1982 loosely based on the novel “Do Androids Dream of Electric Sheep?” by Philip K. Dick. It was directed by Ridley Scott who regards “Blade Runner” as his most “complete” film. There is a phenomenon known as the “‘Blade Runner’ Curse”. An inordinate number of companies behind products that were displayed prominently in the movie found themselves in financial trouble soon after the movie’s release. Included in the list of troubled concerns are Atari, Cuisinart, Pan Am and the Bell System.

29. Funny DeGeneres : ELLEN
Ellen DeGeneres is a very, very successful TV personality, having parlayed her career in stand-up comedy into lucrative gigs as an actress and talk show host. Back in 1997 DeGeneres chose the “Oprah Winfrey Show” to announce that she was a lesbian. Her character on “The Ellen Show” also came out as a lesbian, in a scene with her therapist, played by Oprah Winfrey. Nice twist!

30. Actor Willem : DAFOE
Willem Dafoe is an American actor, from Wisconsin. He was born just plain William Dafoe, but didn’t like being called “Billy”. So, he changed his name to Willem, which was the pronunciation of his name by his Scottish babysitter. Those Scots …

35. Canonized fifth-century pope : ST LEO
The first pope named Leo is now known as Pope Saint Leo the Great. He is famous for meeting with the feared Attila the Hun and persuading him to turn back his invading force that was threatening to overrun Western Europe.

36. SeaWorld whale : SHAMU
Shamu was the name of the third orca, or killer whale, ever to be featured in a public exhibition. She starred in a popular SeaWorld show in San Diego in the sixties. After she died in 1971 her name lived on, as the name “Shamu” is still used by SeaWorld for its killer whale shows. That original Shamu was retired after she grabbed and refused to let go the leg of one of her trainers.

42. Tehran native : IRANI
Tehran is the capital of Iran and is the largest city in the Middle East, with a population of about 8.5 million. Iran has been around an awful long time and Tehran is actually the country’s 31st national capital. We are only babies over here in the US …

53. ___ cotta : TERRA
The name “terra cotta” comes to us from Latin via Italian and means “baked earth”. It is a ceramic made from clay, which is left unglazed. Maybe the most famous work in terra cotta is the Terracotta Army, the enormous collection of life-size figures that were buried with the Qin Shi Huang, the First Emperor of China around 210 BC. I had the privilege of seeing some of this collection when it toured the US a few years ago, and just the few pieces on display were so very impressive.

55. Baby-to-be : FETUS
The word “fetus”, used for an unborn young animal, comes from Latin as one might expect. “Fetus” is the Latin word for the act of hatching or bringing forth a young animal or child. The mistaken spelling “foetus” is seen quite a lot, but there’s no historical basis for adding that “o”.

62. Nintendo console with a remote : WII
“Wiimote” is an alternative name for the Wii Remote, the controller for the Nintendo Wii gaming console.