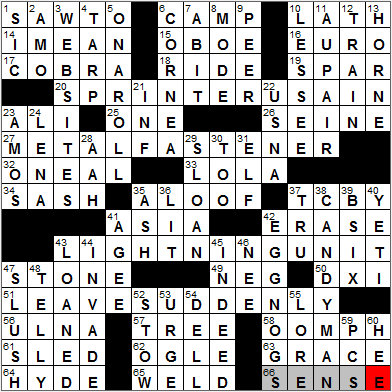 
Today’s Wiki-est, Amazonian Googlies
Across
10. Wood strip : LATH
The words “lath” and “lattice” have the same root in Old French. Laths are thin strips of wood that are nailed across a frame forming a backing to which plaster can be applied to finish a wall.

15. Instrument heard in Sonny & Cher’s “I Got You Babe” : OBOE
The oboe is perhaps my favorite of the reed instruments. The name “oboe” comes from the French “hautbois” which means “high wood”. When you hear an orchestra tuning before a performance, you’ll note (pun intended!) the oboe starts off the process by playing an “A”. The rest of the musicians in turn tune to that oboe’s “A”. Oh, and if you want to read a fun book (almost an “exposé”) about life playing the oboe, you might try “Mozart in the Jungle

16. Currency that replaced the drachma : EURO
The drachma was the currency used in Greece that was replaced by the Euro.

17. “Spitting” snake : COBRA
Several species of cobra are known as “spitting cobras”, meaning that they don’t need to bite to eject their venom and can “spit” it from their fangs to defend themselves. The venom is harmless on skin, unless there is a cut. If the venom gets in the eye though, it can cause blindness.

20. Bolt : SPRINTER USAIN
Usain Bolt is a Jamaican sprinter who in the 2008 Olympics won three gold medals. Back in Jamaica, Bolt was really into cricket and probably would have been a very successful fast bowler had he not hit the track instead.

23. Cousin of Muhammad : ALI
Ali was the cousin of the Islamic prophet Muhammad, as well as his son-in-law. After Muhammad received his divine revelation, Ali was the first man to convert to Islam.

26. Locale of the Île de la Cité : SEINE
There are two famous islands (îles, in French) in the middle of la Seine (the River Seine) in Paris, one being the Île de la Cité, and the other Île Saint-Louis. Île de la Cité is the most famous of the two, as it is home to the cathedral of Notre Dame.

Tatum O’Neal was the youngest actress to win a “competitive” Oscar. She won the Best Supporting Actress Award in 1974 when she was just 10, for her role in “Paper Moon”. The youngest person to win an Academy Award was Shirley Temple, who was only 5 years old when she was given an honorary Oscar in 1934.

33. The “she” in the lyric “She walked up to me and she asked me to dance” : LOLA
“Lola” is a fabulous song, written by Ray Davies and released by the Kinks back in 1970. Inspired by a real life incident, the lyrics tell of young man who met a young “lady” in a club, danced with her and then discovered “she” was actually a transvestite. The storyline isn’t very traditional, but the music is superb.

34. Window part : SASH
A movable (up and down) window frame is called a sash, from the French word for a frame: “châssis”.

35. Unlikely to hug, say : ALOOF
I suppose one might guess from the “feel” of the word “aloof” that is has nautical roots. Originally aloof meant “to windward” and was the opposite to “alee”. A helmsman might be instructed to stay aloof, to steer the boat into the weather to keep a distance from a lee-shore. It is from this sense of maintaining a distance that aloof came to mean “distant” in terms of personality. Interesting, huh …?

37. Frozen dessert franchise : TCBY
TCBY is a chain of stores selling frozen yogurt, founded in 1981 in Little Rock, Arkansas. The acronym TCBY originally stood for “This Can’t Be Yogurt”, but this had to be changed due to a lawsuit being pressed by a competitor called “I Can’t Believe It’s Yogurt”. These days TCBY stands for “The Country’s Best Yogurt”.

41. Part of the Old World : ASIA
The Old World is basically that part of the planet that isn’t the New World (the Americas). The Old World is made up of the three regions where ancient classical civilizations thrived, namely Africa, Asia and Europe.

64. Half of a famous split personality : HYDE
Robert Louis Stevenson’s novella “The Strange Case of Dr. Jekyll and Mr. Hyde” was published in 1886. There are many tales surrounding the writing of the story including one that he wrote the basic tale in just three to six days, and spent a few weeks simply refining it. Allegedly, Stevenson’s use of cocaine stimulated his creative juices during those few days of writing.

Down
1. Word to an attack dog : SIC
Sic ’em is an attack order given to a dog, instructing the animal to growl, bark or even bite. The term dates back to the 1830s, with “sic” being a variation of “seek”.

4. Protective covering : TARP
Originally, tarpaulins were made from canvas covered in tar that rendered the material waterproof. The name tarpaulin comes from “tar” and “palling”, with “pall” meaning “heavy cloth covering”.

6. Pupil coverer : CORNEA
The cornea is the transparent part of the eye in the front, covering the iris and the pupil. Even though the cornea is not part of the lens it acts as a lens, and in fact does most of the work focusing light coming in through the eye. The cornea is in effect a fixed-focus lens passing on light to the variable-focus lens that is inside the eye.

8. Number in statistics : MODE
In statistics, the value known as the mode is very similar to the mean, provided the distribution of the population being studied is “normal”. The mode is the value that occurs most often, where as the mean is the average of all the values, which may not be quite the same thing.

11. Foreign domestic : AU PAIR
An “au pair” is a domestic assistant from a foreign country working and living as part of a host family. The term “au pair” is French, and means “on a par”, indicating that an au pair is treated as an equal in the host family.

21. Like Brahms’s Symphony No. 3 : IN F
Johannes Brahms was a leading German composer from the Romantic period. He is one of the “Three Bs”, often grouped with Johann Sebastian Bach and Ludwig van Beethoven.

22. Jimmy Carter’s alma mater: Abbr. : USNA
President Jimmy Carter was the 39th President, and the only US president to receive the Nobel Peace Prize after leaving office (Presidents Theodore Roosevelt, Woodrow Wilson and Barack Obama have also been so honored, but while in office). President Carter’s popularity in the country greatly eroded during his term, largely due to the Iran hostage crisis. This led to an unsuccessful attempt by Ted Kennedy to win the Democratic Party nomination for the 1980 presidential election, and Carter’s ultimate defeat by Republican Ronald Reagan. Within minutes of President Carter leaving office, the American hostages in Iran were released.

23. Famous ___ cookies : AMOS
Wally Amos was a talent agent, one who was in the habit of taking home-baked cookies with him as an enticement to get celebrities to see him. He was urged by friends to open a cookie store (the cookies were that good, I guess) and this he did in Los Angeles in 1975 using the name “Famous Amos”. The store was a smash hit and he was able build on the success by introducing his cookies into supermarkets. The brand was eventually bought up making Wally a rich man, and Famous Amos cookies are still flying off the shelf.

24. With 13-Down, “Stormy Weather” singer : LENA
(13. See 24-Down : HORNE)
Lena Horne was an American jazz singer, actress, dancer and civil rights activist. Horne started out her career as a nightclub singer and then started to get some meaty acting roles in Hollywood. However, she ended up on the blacklist during the McCarthy Era for expressing left wing political views. One of her starring roles was in the 1943 movie “Stormy Weather” for which she also performed the title song.

29. ___-Kettering Institute : SLOAN
The Sloan-Kettering Institute is the research arm of the Memorial Sloan-Kettering Cancer Center in New York City. The institute was set up in 1945 with funds from the charitable foundation of Alfred P. Sloan, Jr. Charles F. Kettering was an executive at General Motors at the time, and he organized the application of industrial research techniques to the fight against cancer. Sloan and Kettering jointly announced the founding of the institute in the days following the dropping of the first atom bomb on Hiroshima. The pair pointed out that if a two billion dollar scientific effort could produce an atomic bomb, then surely a similar application of funds and scientific talent could make enormous strides in the fight against cancer.

37. Play about Capote : TRU
“Tru” was written by Jay Presson Allen and is a play about Truman Capote that premiered in 1989. There is an interesting anachronism in the piece. It is set in Capote’s New York City apartment at Christmas 1975. At one point the Capote character talks about suicide, saying that he has enough pills to stage his own Jonestown Massacre. The Jonestown Massacre didn’t happen until three years later, in 1978.

38. 1972 #1 hit for Sammy Davis Jr., with “The” : CANDY MAN
Sammy Davis, Jr. began his career in entertainment with his father, as they were two members of the vaudeville act, the Will Mastin Trio. The trio, Mastin and the two Davis men, took a break in 1943 while Davis, Jr. served in the US Army. After the war, the three got back together and continued performing. The men remained very close for their whole lives, and their bodies are even buried side-by-side in the Davis family tomb.

39. Vitamin whose name sounds like a bingo call : B-SIX
The B vitamins were originally thought to be just one vitamin, which was labeled vitamin B. It was then discovered vitamin B was in fact made up of eight distinct vitamins, which today are given distinct numbers (B1, B6, B12 etc). Supplements often contain a mixture of all eight, a combination known as vitamin B complex.

40. Mountain sighting : YETI
A yeti is a beast of legend, also called an abominable snowman. “Yeti” is a Tibetan term, and the beast is fabled to live in the Himalayan regions of Nepal and Tibet. Our equivalent legend in North America is that of Bigfoot. The study of animals whose existence have not yet been substantiated is called cryptozoology.

41. Writer James : AGEE
James Agee was a noted American film critic. He wrote an autobiographical novel “A Death in the Family” that won him his Pulitzer in 1958, albeit posthumously.

42. Drinks that are often ladled : EGGNOGS
A noggin was the name of a small cup back in the 1600s that later lent its name to a small drink (and eventually to “eggnog”).

48. British boob tube : TELLY
“Telly” is the familiar term for a television in the British Isles, as opposed to our American “TV”.

54. Big maker of 59-Down : DELL
Dell, the computer manufacturer, is named after the company’s founder, Michael Dell. Michael Dell started his company in his dorm room at college, shipping personal computers that were customized to the specific needs of his customers. He dropped out of school in order to focus on his growing business, a decision that I doubt he regrets. Michael Dell is now one of the richest people in the world.