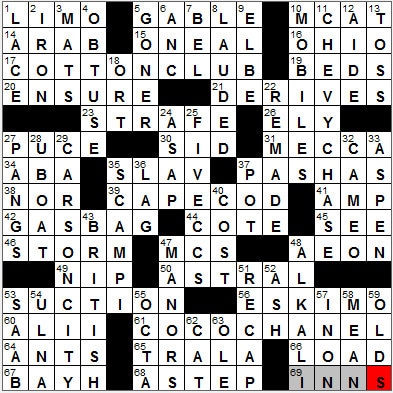 1. Promgoers’ car : LIMO
The word “limousine” actually derives from the French city of Limoges. The area around Limoges is called the Limousin, and it gave its name to a cloak hood worn by local shepherds. In early motor cars, a driver would sit outside in the weather, while the passengers would sit in the covered compartment. The driver would often wear a limousin-style protective hood, giving raise to that type of transportation being called a “limousine”. Well, that’s how the story goes anyway …

5. Clark of “Gone With the Wind” : GABLE
As casting proceeded for the movie version of “Gone With the Wind”, Clark Gable was a shoo-in from day one. The role of Scarlett was considered very desirable in the acting community, with Bette Davis on the short list, and Katherine Hepburn demanding an appointment with producer David O. Selznick to discuss the role. Vivien Leigh was an unlikely contender, an English actress for the definitive Southern belle role. Selznick was adamant though, and stuck by his choice despite a lot of protests.

14. The “A” of U.A.E. : ARAB
The United Arab Emirates (UAE) is a federation of seven emirates (states) in the Middle East. Included in the seven are Abu Dhabi and Dubai, with the city of Abu Dhabi being the UAE capital and cultural center.

15. Ryan of “Love Story” : O’NEAL
There’s no doubt that the 1970 movie “Love Story” is one of the great romantic dramas of all time, but I just think Ali MacGraw was hopelessly miscast and really took the shine off the film for me. I know I am in a small minority that holds that view, as she was nominated for an Oscar for her performance.

17. Legendary 1920s-’30s Harlem nightspot : COTTON CLUB
The Cotton Club was a famous jazz club in Harlem in New York City that thrived during the days of prohibition. Although the stars on stage were mainly African-American, including Duke Ellington, Count Basie and Ella Fitzgerald, the club generally denied admission to African-American patrons.

23. Attack from above : STRAFE
We’ve been using “strafe” to mean an attack on a ground position from low-flying aircraft since WWII. Prior to that, the word was used by British soldiers to mean any form of attack. It was picked up from the German word for “punish” as it was used in “Gott strafe England” meaning, “May God punish England”.

26. English cathedral town : ELY
Ely Cathedral is a famous and beautiful church in the city of Ely in the county of Cambridgeshire. There is a Gothic door on the north face of the cathedral that was designed by Sir Christopher Wren, the man famous as the architect of St. Paul’s Cathedral in London. Christopher Wren had a personal link to the church, as his uncle was the Bishop of Ely.

30. Caesar of 1950s TV : SID
Sid Caesar achieved fame in the fifties on TV’s “Your Show of Shows”, but to be honest, I know him mainly from the fun film version of “Grease” in which he played Coach Calhoun.

31. Birthplace of Muhammad : MECCA
Mecca is in the Makkah province of Saudi Arabia, and is the holiest city in Islam. Several million Muslims every year perform the Hajj, a holy pilgrimage to Mecca.

34. Lawyers’ org. : ABA
The American Bar Association was founded back in 1878, and is a voluntary association for lawyers and law students. The main focus of the ABA is setting academic standards for law schools, and setting ethical codes for the profession.

35. Croat or Serb : SLAV
The Slavic peoples are found in the majority in communities that cover over half of Europe. This large ethnic group is traditionally broken down into three smaller groups:

37. Old Turkish pooh-bahs : PASHAS
A pasha was a high-ranking official in the Ottoman Empire, roughly equivalent to the English rank of “lord”.

The term “pooh-bah” meaning an ostentatious official comes from the world of opera. Pooh-Bah is a character in the wonderful Gilbert & Sullivan comic opera “The Mikado”. Famously, Pooh-Bah holds many, many offices, including that of “Lord High Everything Else”.

39. Popular Massachusetts vacation area : CAPE COD
Cape Cod is indeed named after the fish. It was first called Cape Cod by English navigator Bartholomew Gosnold in 1602 as his men caught so many fish there.

44. ___ d’Ivoire : COTE
The Republic of Côte d’Ivoire is located in West Africa on the Gulf of Guinea. The country is often, mistakenly, referred to as the Ivory Coast, the direct translation from the French. The official language of the country is French, as for many years it was a French colony.

50. Kind of plane or projection : ASTRAL
An astral projection is an out-of-body experience. It is often associated with incidents of near-death and describes the phenomenon of the astral body leaving the physical body and travelling around the astral plane.

56. Inuit : ESKIMO
Although still used in the US, the term “Eskimo” tends to be avoided in Canada and Greenland as it is considered pejorative.

60. Et ___ (and others) : ALII
Et alii is the equivalent of et cetera, with et cetera being used in place of a list of objects, and et alii used for a list of names.

61. Pioneering French designer with her own fragrance : COCO CHANEL
Coco Chanel was a French designer. Perhaps because I am a man, clothes design is not my forte, however, if I had to pick a designer whose clothes I really liked, it would be Chanel. She had a way of creating simpler designs that looked so elegant on a woman.

64. Bugs in “A Bug’s Life” : ANTS
“A Bug’s Life” is a 1998 animated feature film from Pixar. The storyline is based on the film “The Seven Samurai” and the fable of “The Ant and the Grasshopper”.

67. Evan or Birch of Indiana politics : BAYH
Birch Bayh is a former US Senator from Indiana. He ran for the Democratic nomination for president in the 1976 election, but lost out to Jimmy Carter. Bayh was in a small plane crash in 1964 with his colleague Senator Ted Kennedy. Kennedy was badly injured and Bayh pulled him from the wreckage to safety.

Evan Bayh is the son of Birch Bhay, and like his father was US Senator for the state of Indiana. Prior to serving in the Senate, Evan Bayh was governor of the state.

69. B&B’s : INNS
An intimate inn (in the US) is a bed & breakfast. A bed & breakfast back in Ireland is more basic, and is almost always much cheaper than a comparable hotel room.

Down
1. Negligee material : LACE
Our word “negligee” is borrowed from the French. In France, the word “négligée” described a simple loose gown worn by women. The term came from the French for “neglect”, reflecting the “neglected” look of the simple gown compared to the elaborate clothing worn by society women.

2. Fe, to scientists : IRON
Iron has the chemical symbol Fe, from the Latin word for iron … “ferrum”.

6. Org. led by Mandela, once : ANC
The ANC started out as the South African Native National Congress in 1912 with the goal of improving the lot of Black South Africans. After years of turmoil the ANC came to power in the first open election in 1964.

7. ___ Paese cheese : BEL
Bel Paese is a mild Italian cheese invented in the 1906. The name “bel paese” means beautiful country in Italian, and is taken from the title of a book written by Antonio Stoppani.

9. German river to the North Sea : ELBE
Towards the end of WWII in Europe the American and Soviet armies were closing in on the German troops, with the Americans coming from the west and the Soviets from the east. An important step achieved in the final plan to defeat Germany was when the two allied armies met on April 25, 1945, joining forces near Torgau in Germany, on the River Elbe.

11. Comic actor who shares a name with a Washington suburb : CHEVY CHASE
There’s an old song called the “Ballad of Chevy Chase” from the 15th century which tells of a hunting party that turned into a battle between the English and the Scots. This ballad gave rise to the term “chevy chase” meaning a running pursuit. The word “chevy” then meant to chase, and from this came “chivy”, to harass with petty attacks. And yes, the actor Chevy Chase was given his nickname from the very same ballad, by his grandmother.

22. Like the film “Arthur” in 2011 : REMADE
Jason Winer is the director of the 2011 remake of the classic 1981 movie “Arthur”. In the new version, Dudley Moore’s title role is played by the wacky English comic Russell Brand. Jennifer Garner is the love interest, taking on the role played by Liza Minnelli in the original. And, in a nice twist, the role of the manservant previously played by Sir John Gielgud, is portrayed by the fabulous Helen Mirren.

25. Small amount of blood serum … or a title for this puzzle : FIVE CCS
5 cubic centimeters …

28. W.W. II ship sinker : U-BOAT
U-boat stands for the German “Unterseeboot” (undersea boat). U-boats were primarily used in WWII to enforce a blockade against enemy commercial shipping, with a main objective being to cut off the supplies being transported to the Britain from British colonies and the US. The fight for control of the supply routes became known as the Battle of the Atlantic.

29. Capital of Nevada : CARSON CITY
Carson City, Nevada was named for the Carson River, which in turn was named for the Kit Carson, the scout who accompanied the team of European Americans that first arrived in the area in 1843.

32. Traditional Hitchcock appearance in a Hitchcock film : CAMEO
Alfred Hitchcock makes a cameo appearance in 39 of his 52 movies. My favorite, and perhaps the most innovative, is in the movie “Lifeboat”. In the film, there is a limited cast, the people in a lifeboat, and no extras. Hitchcock managed to make his appearance in a print ad in a newspaper read by one of the survivors in the boat.

33. Colorado town or tree : ASPEN
Aspen, Colorado used to be known as Ute City, with the name change taking place in 1880. Like many communities in the area, it was a mining town, and in 1891 and 1892 it was at the center of the highest production of silver in the US. Nowadays of course, it’s all about the skiing and the movie stars.

43. Like the Union Jack : BRITISH
The Union Jack is a “jack” (a flag) representing the “Union” (the United Kingdom of Great Britain and Northern Ireland). The flag is made up of three crosses:

53. Swedish auto : SAAB
SAAB stands for Svenska Aeroplan AB, which translates into English as Swedish Aeroplane Limited. So yes, SAAB was and still is mainly an aircraft manufacturer. If you take small hops in Europe you might find yourself on a SAAB passenger plane. The SAAB automobile division was acquired by General Motors in the year 2000.

59. Cutlass or Super 88 of bygone autodom : OLDS
Oldsmobile introduced the Cutlass in 1961, and used the name on a succession of models right up to 1999. The Oldsmobile 88 was a bigger car, also produced until 1999, but it was introduced much earlier, in 1949.