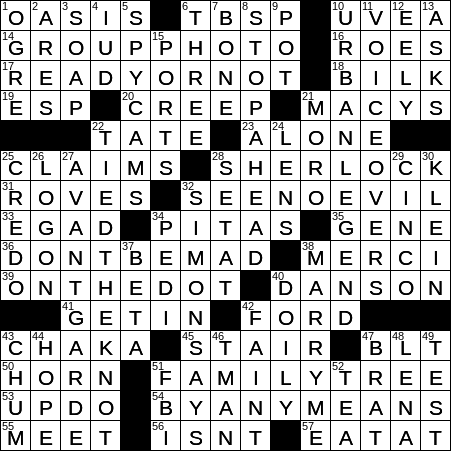 The original Macy’s store was opened by Rowland Hussey Macy in Haverhill, Massachusetts in 1851. This store, and several others that Macy opened, all failed. Macy picked himself up though, and started over again in New York City. Those early New York stores all focused on the sale of dry goods, but added departments quickly as the clientele grew. The Macy’s “star” logo has been around since the company was first established. Macy chose the star because it mimicked the star tattoo that he got as a teenager when he was working on a whaling ship out of Nantucket.

The Bloomingdale’s chain of department stores was founded by two Bloomingdale brothers in the Lower East Side of Manhattan. The company’s original product line was hoop skirts.

Sherlock Holmes made his first appearance in Sir Arthur Conan Doyle’s 1887 novel, “A Study in Scarlet“. Amazingly, Conan Doyle wrote the novel in under three weeks, while working as a 27-year-old doctor. Mind you, he only got paid 25 pounds for all the rights to the story. I suppose it’s a good job that he only devoted a few weeks to it.

Actor Ted Danson is noted for in particular for three successful roles that he has played on television. He played Sam Malone on the sitcom “Cheers”, the title role on the sitcom “Becker”, and eventually led the cast on the drama series “CSI: Crime Scene Investigation”. Danson has been married to actress Mary Steenburgen since 1995.

47 Where to stick a toothpick : BLT

2 Father of Deimos and Phobos : ARES