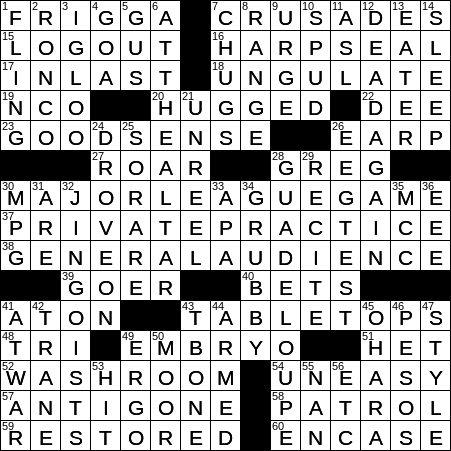 Constructed by: Adam Fromm
Edited by: Will Shortz

The very talented actress Rene Russo is a native of Burbank, California. Russo went to highschool (with actor/director Ron Howard), but dropped out in tenth grade. At seventeen, she was given the opportunity to train as a model and within a very short time appeared on the cover of “Vogue”. As her modelling jobs slowed down in her early thirties, Russo made a career change and studied theater and acting. I am so glad she did, as Rene Russo is one of my favorite actresses …

Ungulates are hoofed animals. “Ungulate” comes from the Latin “ungula” meaning “hoof” or “claw”, which in turn comes from “unguis” meaning “nail”.

26 Brother of the Wild West : EARP

The character Greg Brady is the oldest Brady son in the sitcom “The Brady Bunch”. Greg was played by Barry Williams in the TV show. It was revealed in spin-offs of the original sitcom that Greg married a nurse and became an obstetrician.

Someone who is het up is worked up, or angry. “Het” is an archaic word meaning “heated”.

57 Daughter (and granddaughter) of Jocasta : ANTIGONE

Ronco is a company the builds and sells products mainly for the kitchen. Over the years, the company has been closely associated with the “-O-Matic” suffix, and particularly the “Veg-O-Matic” vegetable slicer. Ronco is also associated with the phrase “set it and forget it”, which was used for the Showtime Rotisserie Grill.

Andrew Lloyd Webber’s source material for his hit musical “Cats” was T. S. Eliot’s “Old Possum’s Book of Practical Cats”. Eliot’s collection of whimsical poems was published in 1939, and was a personal favorite of Webber as he was growing up. “Cats” is the second longest running show in Broadway history (“Phantom of the Opera” is the longest and is still running; deservedly so in my humble opinion). My wife and I have seen “Cats” a couple of times and really enjoyed it …

Bubble and squeak is a dish that originated in the UK. The basic dish is made from leftover mashed potato and cabbage, which are mixed together and pan-fried. We have a similar dish in Ireland called colcannon. I love colcannon, absolutely love it …

11 Communication that’s seen but not heard, for short : ASL

Kenneth Branagh is a much-respected Shakespearean actor and film director from Belfast, Northern Ireland. Not only is Branagh familiar with playing Shakespearean characters on stage, he is also noted for many performances in Shakespearean plays adapted for the big screen. Branagh was married to the magnificent actress Emma Thompson, and after their divorce spent years in a relationship with actress Helena Bonham Carter. Recently, I have been enjoying watching Branagh in the crime TV series called “Wallander” that is set in Sweden.

25 Jimmy Dorsey standard with the line “You’re like the fragrance of blossoms fair” : SO RARE

“So Rare” is a song that first became popular with a recording by Guy Lombardo in 1937. “So Rare” was to be a major hit for Jimmy Dorsey twenty years later, in 1957.

Guadeloupe is an island in the Caribbean, and is one of the Leeward Islands. It is an overseas department of France, and as such is part of the European Union.

31 Word whose first letter is dropped in contractions : ARE

43 Collide with in an intersection, perhaps : T-BONE

“Appointment in Samarra” was John O’Hara’s first novel, and was published in 1934. Samarra is a city north of Baghdad in Iraq, although the story itself takes place in a fictional town in Pennsylvania. The novel deals with the last three days in the life of Julian English, describing how he destroys himself with a series compulsive acts leading up to his suicide. This one doesn’t qualify as light reading for the plane …

Nan Goldin is an American photographer who works out of New York, Berlin and Paris.