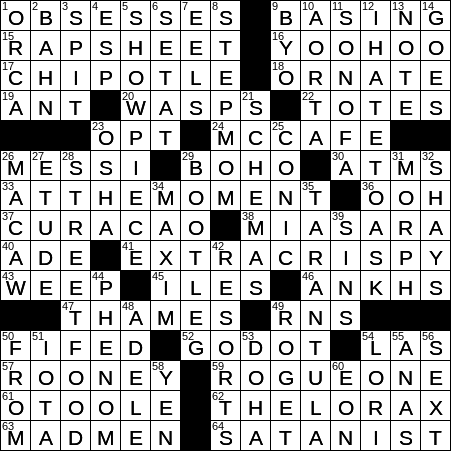 The jalapeño is a chili pepper, and a favorite of mine. The pepper’s name translates from Spanish as “from Xalapa”. Xalapa (also “Jalapa”) is the capital of the Mexican state of Veracruz, and the traditional origin of the jalapeño pepper. A smoke-dried jalapeño, called a chipotle, is used for seasoning.

Art Nouveau (French for “new art”) is a style that was popular from 1890 to 1910. Although the English-speaking world adopted the French name for the style, Art Nouveau was known as “Jugendstil” in Germany, “Modern” in Russia and “Stile Liberty” in Italy.

In Aesop’s fable “The Ant and the Grasshopper”, the grasshopper spends the warm months singing and having a good time while the ant toils away storing food. When winter arrives, the grasshopper starts to die from hunger and begs the ant for food. The ant tells the grasshopper that he should have been more sensible instead of singing away all summer, and maybe he should dance through the winter!

The liqueur known as Curaçao comes from the island of Curaçao in the southern Caribbean. The liqueur is usually given artificial coloring to make it suitable for use in exotic cocktails. The common colors used are blue and orange.

The character Sloane Peterson in “Ferris Bueller’s Day Off” is played by the very beautiful actress Mia Sara. Sloane is the girlfriend of the title character.

In French, the nation of “Indonésie” (Indonesia) comprises many, many “îles” (islands).

The River Thames flowing through London is the longest river entirely located in England.

Wayne Rooney is a famous, and somewhat infamous, soccer player who turned out for Manchester United and the English national team before relocating to the US to play for DC United. Rooney was widely regarded as the most talented player in England in his day, but he also attracted a lot of attention off the field for his wild private life.

“Lawrence of Arabia” is a 1962 movie that recounts the real life story of T. E. Lawrence, a British army officer famous for his role in the Sinai and Palestine Campaign of World War I. The title role in the film is played by Irish actor Peter O’Toole. The role of Sherif Ali ibn el Kharish is played by Omar Sharif.

62 Classic book that begins “At the far end of town where the Grickle-grass grows …” : THE LORAX

63 Show that won the Outstanding Drama Emmy for each of its first four seasons : MAD MEN

1 Sight on an Alaskan cruise : ORCA

The federal highway system in Germany is known as the Autobahn (plural “Autobahnen” in German). Famously, there are no federally mandated speed limits on the autobahn, although many, many stretches of the highway do indeed have posted and enforced limits. Where there is no speed limit posted, there is an advisory speed limit of 130 km/hr (81 mph). It is not illegal to travel over this speed limit, but legal liability may increase at higher speeds if that speed contributes to an accident.

23 Agcy. headed by a deputy asst. secretary of labor : OSHA

27 Piece played in a conservatory : ETUDE

35 One with hairy legs : TARANTULA

The concept of a honeymoon vacation only started in the early 1800s. In Britain, wealthy couples would take a “bridal tour” together after wedding, visiting those friends and relatives who could not attend the ceremony. The etymology of “honeymoon” isn’t very clear, and may even have a negative derivation as it might suggest that the sweetness (honey) of love is doomed to wane like a passing phase of the moon. The equivalent terms in some other languages are “moon of honey” (French), “honey month” (Welsh) and “tinsel week” (German).