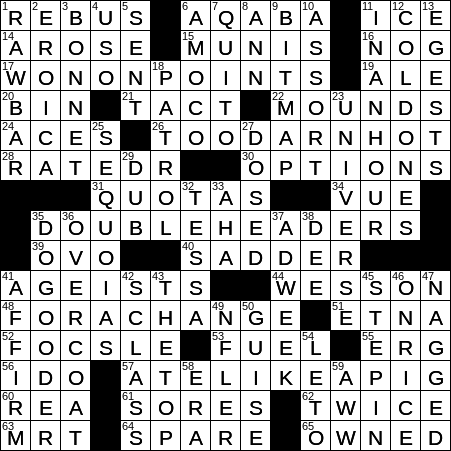 Themed answers start with homophones of numbers. We start at number one, and DOUBLE as we progress down the grid:

A quota is an allotment. The term “quota” was used originally with reference to the number of soldiers or quantity of supplies required from a particular town or district.

Wesson cooking oil was named for David Wesson, a food chemist who came up with a process to deodorize cottonseed oil in 1899. Wesson used to be pure cottonseed oil, but is now a mixture of cheaper vegetable oils. Actress Florence was the longtime spokesperson for the product, appearing in Wesson TV commercials from 1976 until 1996.

The forecastle (usually abbreviated to “fo’c’sle”) is the forward part of a ship where the sailors’ sleeping quarters are located. The term is also used to describe the upper deck, forward of the foremost mast. The related phrase “before the mast” is used to describe anything related to a ship’s enlisted men, those sailors who are not officers.

6 Gas brand with a torch in its logo : AMOCO

The giant sequoia tree is also known as the giant redwood. There’s only one part of the world where you can see giant sequoias growing naturally, and that’s on the western slopes of the Sierra Nevada mountain range in California. However, there are plenty of examples of giant sequoias that have been planted as ornamentals all over the world.

37 Magazine with an Agency of the Year award : ADWEEK