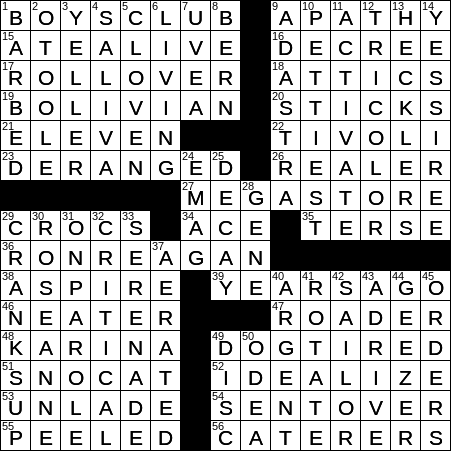 Constructed by: Kevin Adamick
Edited by: Will Shortz

9 “Science may have found a cure for most evils; but it has found no remedy for the worst of them all – the ___ of human beings”: Helen Keller : APATHY

17 What some investments and trained dogs do : ROLL OVER

A rollover IRA is a subtype of traditional Individual Retirement Account (IRA). The funds for a rollover IRA come from another qualified plan such as a 401(k) or a 403(b) account.

Bolivia is a landlocked country in South America, bordered by Brazil, Paraguay, Chile, Peru and Argentina. The land now occupied by Bolivia was originally part of the Inca Empire. The country declared independence from Spain in 1809, which led to 16 years of war. When the Republic was finally named, “Bolivia” was chosen in honor of the Venezuelan-born revolutionary leader, Simón Bolívar.

21 One after another? : ELEVEN

A “one” after another “one” is the number “eleven”.

Tivoli is an ancient town in Italy, located about 20 miles outside Rome. Tivoli is home to a Temple of Vesta, which dates back to the 1st-century BCE. It is also home to the 16th-century Villa d’Este, which is a UNESCO World Heritage Site.

Crocs are foam clogs that were originally designed as shoes to be worn at health spas.

Anna Karina is a French actress who was originally from Denmark. Karina has appeared in a lot of movies directed by Jean-Luc Godard. Karina and Godard married in 1961 in the middle of shooting “A Woman Is a Woman”, one of their most famous collaborations. The marriage was always tense according to all accounts, and only lasted a few years.

53 Remove a burden from : UNLADE

2 Actor with the #1 film performance in Premiere magazine’s list of “100 Greatest Performances of All Time” : O’TOOLE

Originally, the verb “to heckle” meant to question severely, and for many years was associated with the public questioning of parliamentary candidates in Scotland. In more recent times, the meaning has evolved into questioning that is less polite and that is directed at stand-up comics.

Salon.com is a popular online magazine, one of the first “ezines” ever published. “Salon” focuses on American politics and current affairs, but also has articles about books, music and films. The magazine was launched in 1995, and managed to survive many loss-making years. Most of Salon’s content is free, but it does make money by offering a premium service with extra content, and by selling ad space.

31 Out but with caveats : ON PAROLE

Photoshop is a wonderful piece of software used for editing graphics. When I first bought a copy of Photoshop, it was really expensive (about $300, ten years ago), but now there are cost-effective, stripped-down versions available. Also, the full version of Photoshop is now only available as a monthly subscription service.

Our intervertebral discs are composed mainly of cartilage. They perform the crucial functions of separating the vertebrae while allowing slight movement, and also absorbing shock. A “slipped disc” isn’t really a disc that has “slipped”, but rather a disc that “bulges”. If that bulge causes pressure on the sciatic nerve then the painful condition known as sciatica can result.