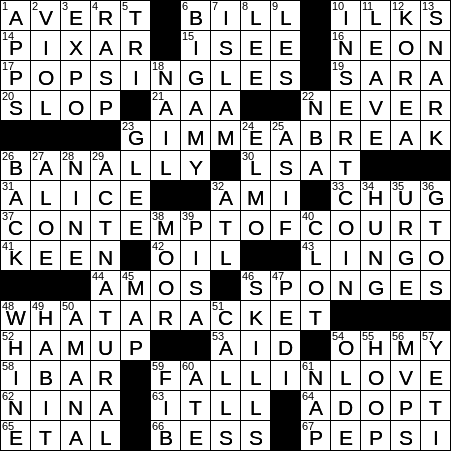 Themed answers are common phrases that have been applied to the game of tennis, in a “punny” sort of way:

The title character in Lewis Carroll’s 1865 novel “Alice’s Adventures in Wonderland” is based on a child named Alice Liddell. Lewis Carroll (real name “Charles Lutwidge Dodgson”) met the Liddell family while he was photographing Christ Church Cathedral in Oxford, after which he befriended the Liddells. Carroll told the three Liddell sisters (including Alice) a story about a little girl named Alice and her adventures, in order to entertain the children while on a boating trip on the River Isis in Oxford. He elaborated on the story for the girls on a subsequent boat trip, and agreed to write down the tale as the children loved it so much. Carroll’s writings became a full-fledged manuscript, including the author’s own illustrations. It was first published in 1865, three years after that boat trip.

The ship used by Christopher Columbus that we know as the Niña was actually the nickname of a ship actually called the Santa Clara. The nickname “Niña” probably came from the name of her owner, Juan Niña of Moguer.

2 Relative of a cello : VIOL

12 Locale for Pyongyang and Seoul : KOREA

39 Italian city you might be “leaning” toward visiting? : PISA

46 Listings on a résumé : SKILLS

56 Some postseason awardees, for short : MVPS

The yeti, also known as “the abominable snowman”, is a beast of legend. “Yeti” is a Tibetan term, and the beast is fabled to live in the Himalayan regions of Nepal and Tibet. Our equivalent legend in North America is that of Bigfoot, also known as Sasquatch. The study of animals whose existence have not yet been substantiated is called cryptozoology, and a cryptid is a creature or plant that isn’t recognized by the scientific community, but the existence of which has been suggested.