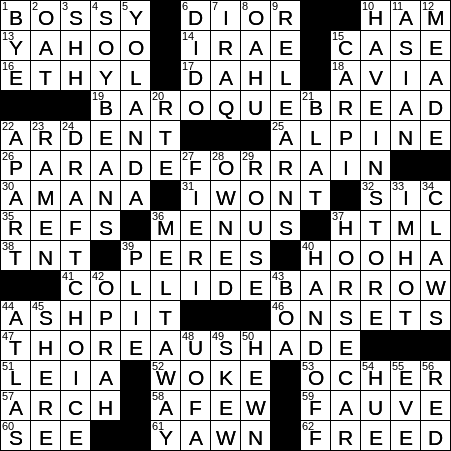 Today’s Theme (according to Bill): Add a Schwa

Themed answers sound like common phrases, but with a schwa (an unstressed vowel) added at the beginning:

6 Who said “A woman’s perfume tells more about her than her handwriting” : DIOR

The “croque monsieur” is a French dish, a baked or fried ham and cheese sandwich. Before baking, the sandwich is dipped in whipped eggs. The cheese used is traditionally Emmental or Gruyère. If the sandwich is topped with a fried egg, then it referred to as a croque madame.

38 AC/DC single with the lyric “Watch me explode” : TNT

39 Israeli president who was the author of 11 books : PERES

41 Bumper version of a cart? : COLLIDE BARROW (from “Clyde Barrow”)

Bonnie and Clyde were criminals who robbed and killed their way across the central US during the Great Depression. Clyde Barrow was born a desperately poor young boy just south of Dallas, Texas. He was always in trouble with the law, first getting arrested at the age of 16. He met Bonnie Parker in 1930 at a friend’s house, and the smitten Parker followed Clyde into a life of crime. The pair were killed by a posse of Texas police officers just four years later in Louisiana.

47 What the trees by Walden Pond provided? : THOREAU SHADE (from “throw shade”)

To throw shade is to show disrespect to someone publicly using insults or criticisms.

A dido is a mischievous prank. The etymology of the term “dido” is unclear, though it might somehow come from the Carthaginian Queen Dido who appears in the “Aeneid”.

The westernmost and southernmost “interstate” highway in the US is the H-1 on the island of Oahu.

12 George ___, general at the Battle of Chancellorsville : MEADE

George Meade was a career army officer with a depth of experience in civil and military operations even before the onset of the Civil War. During the war he rose to the level of commander of the Army of the Potomac, and is best remembered for leading the Union forces that defeated General Robert E. Lee at Gettysburg in 1863.

The Civil War Battle of Chancellorsville was fought in April/May 1863. The combatants were the Union Army of the Potomac led by Major General Joseph Hooker and the Confederate Army of Northern Virginia led by General Robert E. Lee. Although Lee’s forces were half the size of Hooker’s, the Confederates emerged victorious. One notable outcome of the engagement was the death of Confederate general Stonewall Jackson, a victim of friendly fire.

27 Guy in a restaurant : FIERI

34 Weapons for the X-Man Wolverine : CLAWS

In Rudyard Kipling’s “The Jungle Book”, the author names his regal tiger character “Shere Khan”. Kipling chose this name as he had met an Afghan Prince in his travels named “Sher Shah Suri”, meaning “The Lion or Tiger King”.

48 Tucson school, informally : U OF A

The University of Arizona (UA, or “U of A”) was the first university founded in the state, opening its doors for students in Tucson in 1885 (which was actually 27 years before the territory was granted statehood).