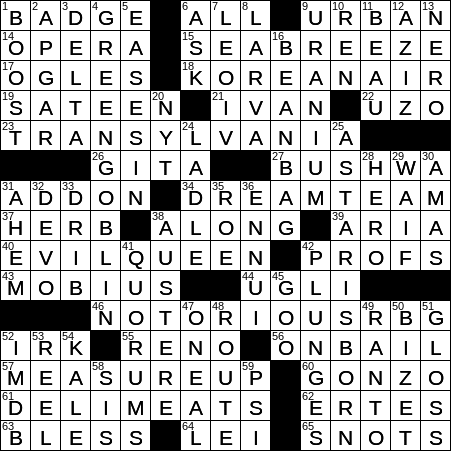 Keith Urban is a country singer from Australia who was actually born in New Zealand. Urban moved to Nashville, Tennessee in 1992. He married Australian actress Nicole Kidman in 2006.

18 Carrier with a yin/yang symbol in its logo : KOREAN AIR

22 Actress Aduba of “Orange Is the New Black” : UZO

23 Where one might go out to get a bite? : TRANSYLVANIA

Transylvania is a geographic region in the center of Romania. Transylvania is very much associated with vampires ever since the publication of Bram Stoker’s novel “Dracula” that is set in the area.

The Bhagavad Gita (sometimes just “the Gita”) is a Hindu scripture written in Sanskrit, the title of which translates as “The Song of the Bhagavan”.

Bushwa is rubbish, nonsense, rot. The term “bushwa” originated in the early 1900s and may be a derivative of “bourgeois”.

“La bohème” by Giacomo Puccini is the second most frequently performed opera in the US (after “Madama Butterfly”, also by Puccini). The lead female role in the piece is Mimì, a seamstress.

Professors (profs.) are people at a university (U.).

An ugli fruit is a hybrid of an orange and a tangerine that was first discovered growing wild in Jamaica where most ugli fruit comes from today. “UGLI” is a trademark name that is a variant of “ugly”, a nod to the fruits unsightly wrinkled rind.

Associate Justice Ruth Bader Ginsburg serves on the US Supreme Court. Justice Ginsburg was the second woman to join the Court, nominated by President Bill Clinton. She was diagnosed with colon cancer in 1999 and underwent surgery, chemotherapy and radiation therapy. During that time she did not miss one day on the bench. In 2009 Justice Ginsburg had surgery for pancreatic cancer, and was back to work 12 days later. She had left-lung lobectomy to remove cancerous nodules in 2018, which forced Justice Ginsburg to miss oral argument in January 2019, for the first time since joining the court 25 years earlier. Much of Ginsburg’s life is recounted in the excellent 2018 movie “On the Basis of Sex”.

55 Sparks can be seen at its edge : RENO

7 Pope during the Battle of Ostia : LEO IV

Pope Leo IV succeeded Pope Sergius II in the year 847 AD. After his death in 855 AD, Leo IV was succeeded by Benedict III, although there was a medieval tradition that he was followed by Pope Joan, a woman disguising herself as a man.

9 Stockpile that may be subject to inspection : URANIUM

NWA was a hip hop group from Compton, California. The original five group members included rappers who have made a name for themselves as solo acts, including: Dr. Dre and Ice Cube. The story of NWA is told in a 2015 film, also called “Straight Outta Compton”. I hear that the movie was well received, although hip hop is not my cup of tea …

Tariq Aziz is the former Deputy Prime Minister of Iraq, serving under Saddam Hussein. He surrendered to US forces in 2003 and is in prison right now in Baghdad.

The Circus of Nero was also called the Circus of Caligula, as its construction was started by Caligula and finished by Nero. This particular Roman circus was the site of the first state-sponsored martyrdoms of Christians, in 65 AD. The martyrs were mainly executed by crucifixion, and some believe that St. Peter met his fate at the site.

25 2018 Oscar-nominated picture whose soundtrack sold over one million copies : A STAR IS BORN

Devo is a band from Akron, Ohio formed back in 1973. The band’s biggest hit is “Whip It” released in 1980. Devo have a gimmick: the wearing of red, terraced plastic hats that are referred to as “energy domes”. Why? I have no idea …

36 Opposite of excitement : ENNUI

50 Georges of the Romantic era : BIZET