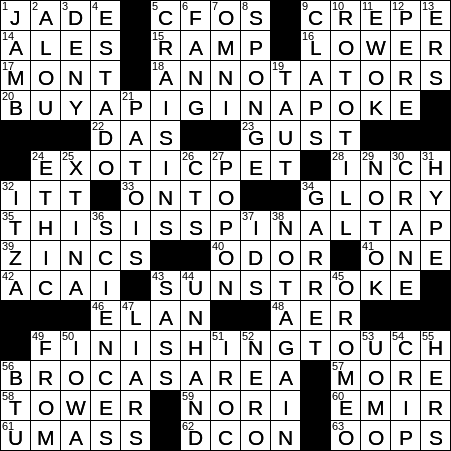 Themed answers each FINISH with a type of TOUCH:

5 Execs who handle the green : CFOS

20 Purchase something sight unseen : BUY A PIG IN A POKE

35 1984 mockumentary with a lot of ad-libbed dialogue : THIS IS SPINAL TAP

Paul Broca was a French physician who provided the first anatomical proof that brain function was localized. He studied the brains of individuals suffering from aphasia, the inability to comprehend formulate language due to brain injury after a stroke or head trauma. Broca discovered that aphasia patients had lesions in a specific part of the brain, the left frontal region. This region of the brain’s cortex that is responsible for language is now called Broca’s Area, in his honor.

61 Sch. whose athletes are the Minutemen and Minutewomen : UMASS

The athletic teams of the University of Massachusetts Amherst are known as the UMass Minutemen and Minutewomen.

2 Felipe or Moises of baseball : ALOU

“Craisin” is a registered trademark owned by Ocean Spray, and is used to describe dried cranberries, cranberries that look like raisins.

The rototiller (or rotary tiller) was invented by Arthur Clifford Howard in 1912, in Australia.

“Patois” is a word that we imported from French, in which language it also means “native or local speech”.