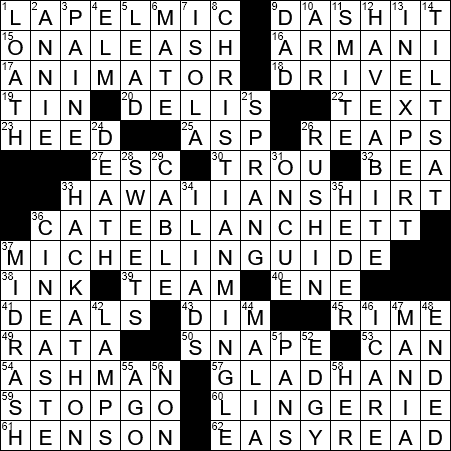 The origins of our word “jalopy” meaning “dilapidated, old motor car” seem to have been lost in time, but the word has been around since the 1920s. One credible suggestion is that it comes from Xalapa, Mexico as the Xalapa scrap yards were the destination for many discarded American automobiles.

20 Establishments whose products might be described by this answer + H : DELIS

Some products made by delis are “delish”.

36 Only person to win an Oscar for playing an Oscar-winning actress : CATE BLANCHETT

The city of Harrisburg, Pennsylvania is the state’s capital. The city was named for John Harris, Sr. who operated a ferry across the Susquehanna River that runs through Harrisburg. Harrisburg is home to the Three Mile Island nuclear plant, which is located alongside the Susquehanna, and which had a partial meltdown in 1979.

The Pennsylvania city of Allentown was founded in 1762 by William Allen, a loyalist who served as Chief Justice of the Province of Pennsylvania and also mayor of Philadelphia. Allen named the new development “Northampton Town”, although the the name “Allentown” was used by locals for decades. The official name change had to wait until 1838. Today, Allentown is the third-largest city in Pennsylvania, after Philadelphia and Pittsburgh.

50 The half-blood prince in “Harry Potter and the Half-Blood Prince” : SNAPE

Howard Ashman was a playwright who was better known as a lyricist, especially for Disney movies such as “The Little Mermaid”, “Beauty and the Beast” and “Aladdin”. Ashman also directed, wrote the book and wrote the lyrics for the 1982 musical “Little Shop of Horrors”.

“To glad-hand”, meaning “to extend a welcome”, has been around as an expression since the end of the 1800s, although it was used less cynically back then. Then along came politicians …

“Lingerie” is a French term. As used in France, it just means any underwear, worn by either males or females. In English we use “lingerie” to describe alluring underclothing worn by women. The term “lingerie” comes into English via the French word “linge” meaning “washables”, and ultimately from the Latin “linum”, meaning “linen”. We tend not to pronounce the word correctly in English, either here in the US or across the other side of the Atlantic. The French pronunciation is more like “lan-zher-ee”, as opposed to “lon-zher-ay” (American) and “lon-zher-ee” (British).

61 Creator of Kermit the Frog and Rowlf the Dog : HENSON

2 Musical with the song “You’re Never Fully Dressed Without a Smile” : ANNIE

The Broadway musical “Annie” is based on the Harold Gray comic strip “Little Orphan Annie”. There have been two film adaptations of the musical. Both were really quite successful, including one released in 1982 directed by John Huston of all people. It was his only ever musical.

3 Patriot who said “Moderation in temper, is always a virtue; but moderation in principle, is a species of vice” : PAINE

Tilting is the most recognized form of jousting. Jousting can involve the use of a number of different weapons, but when lances are used, the competition is called tilting.

A hackathon is an event in which software developers collaborate intensively on a project, usually for a day or a week. It is a hack marathon, with “hack” in this case being legal, explorative programming. Apparently, the first event described as a hackathon was held by ten American developers who met in Calgary to work on cryptographic software. Calgary was chosen so as to avoid US export regulations relating to software.

“Napoleon Dynamite” is a comedy film released in 2004 that stars Jon Heder in the title role. The movie was a commercial success above and beyond expectations. “Napoleon Dynamite” was made on the relatively low budget of about $400,000, and yet grossed almost $45 million within a year. The title character is a nerdy high school student who spends much of life living in his fantasy world.

A cineaste is a cinephile, a person with a deep interest in cinema. The term “cineaste” comes from the French “cinéaste”, which refers to a filmmaker.

A midrash is a learned interpretation of the Torah texts that are central to the Jewish tradition.

The archetypal Tiffany lamp is made up of pieces of colored, leaded glass with a copper foil bonding the pieces together, and a solder applied over the foil. The resulting effect resembles a stained glass window.