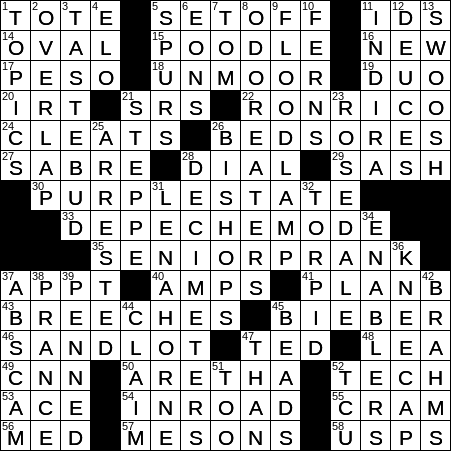 Subaru is the automobile division of the Japanese company, Fuji Heavy Industries. The name “Subaru” is the Japanese name of the Pleiades star cluster. As a result, the Subaru logo is also a cluster of stars.

Are you serious (“r u srs” in textspeak)

They would be brands of rum.

28 People are told not to touch it : DIAL

46 Diamond in the rough? : SANDLOT

I think that Aretha Franklin, the “Queen of Soul”, had a tough life. Franklin had her first son when she was just 13-years-old, and her second at 15. In 2008, “Rolling Stone” magazine ranked Franklin as number one in their list of the greatest singers of all time.

Club Méditerranée is usually referred to as “Club Med”. It is a French company that started in 1950 with a resort on the Spanish island of Mallorca in the Mediterranean. It was originally a “club” with annual membership dues. Now it is an operator of numerous all-inclusive resorts located all over the world.

58 Org. with a Change My Address portal on its website : USPS

2 Center of a Venn diagram : OVERLAP

The FBI set up a sting operation in 1978 that eventually targeted corruption within Congress. Central to the “scam” was a front company called “Abdul Enterprises, Ltd”, which company name led to the whole operation being nicknamed “Abscam”. At the end of the say, one senator and five House members were convicted of bribery and conspiracy. Karim Abdul Rahman was the fictional sheik that gave “his” name to the front company.

Wampum are sacred shell beads of North American tribes in the Eastern United States. The early European colonists often used wampum to trade with the native peoples. From this original usage, “wampum” came to be a slang term for money.