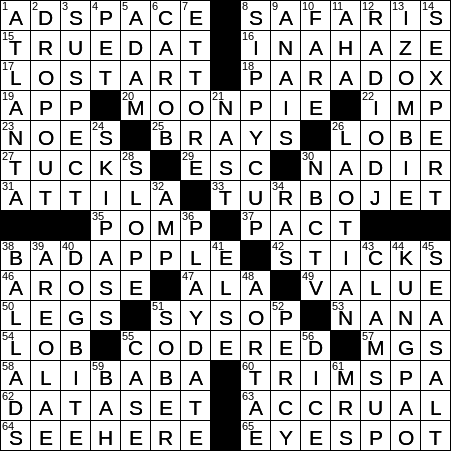 20 Dessert traditionally served with an RC Cola in the South : MOON PIE

Marshmallow cream was developed in 1927. Soon after, workers in the coal mines around Chattanooga, Tennessee started dipping graham crackers in marshmallow cream as a snack. Then a local baker jumped on the idea, and came up with a sandwich made with a marshmallow filling between two round graham crackers. His young grandson remarked that the popped bubbles in the marshmallow (from baking) looked like moon craters, and the Moon Pie was born. I used to love them as a kid, although we called them “Wagon Wheels” in our part of the world.

Nehi Corporation was the nickname for the Chero-Cola/Union Bottle Works that introduced the Nehi drink in 1924. Years later the company developed a new brand, Royal Crown Cola (also known as RC Cola). By 1955, RC Cola was the company’s flagship product, so the “Nehi Corporation” became the “Royal Crown Company”. In 1954, RC Cola became the first company to sell soft drinks in cans.

Robert Louis Stevenson (RLS) was a Scottish author. He was most famous for his novels “Treasure Island”, “Kidnapped” and “The Strange Case of Dr Jekyll and Mr Hyde”.

Turbofans and turbojets are types of aircraft engine. Turbofan engines are quite common on large passenger aircraft. Turbojet engines are more efficient at speeds higher than Mach 2, so are more likely to be found on something like a cruise missile.

“Nana” is a novel by the French author Émile Zola. It is the ninth in a series of twenty books collectively given the title “Les Rougon-Macquart”. The series follows the life of a fictional family during the Second French Empire in the second half of the 19th century.

An ocellus (plural “ocelli”) is an eye-like marking, or eyespot. A good example of ocelli are the eyespots on the elaborate display feathers of a peacock.

The 1989 movie “Driving Miss Daisy” is based on the 1987 play by Alfred Uhry. Not only did Uhry win the Pulitzer for the play, he also won an Academy Award for the screenplay for the movie. In a famous scene, when Hoke, Miss Daisy’s driver takes her from Atlanta to Mobile for her brother’s 90th birthday party, Hoke reveals to his passenger that the journey marked the first time he had ever left his home state of Georgia.

3 Any character with a token in Clue : SUSPECT

6 Ingredient in some chips : CAROB

7 Automaker Bugatti who reportedly said “I make my cars to go, not to stop” : ETTORE

Dr. Ruth Westheimer is a German sex therapist who made a name for herself as a media personality. Westheimer is the daughter of Orthodox Jews and was sent away from Germany by her family just before WWII. She ended up in Palestine and participated in the 1948 Palestine War serving as a scout and sniper. Westheimer was seriously wounded, and spent several months unable to walk. She moved to France in 1950, and soon after arrived in the US. It was in the US where she did her training as a sex therapist.

30 Its headquarters are at 30 Rockefeller Plaza : NBC TV

A resident assistant or resident adviser (RA) is a peer leader found in a residence hall, particularly on a college campus.

45 Ingredient in some chips : SEA SALT

The lobbyists have done their job when it comes to the labelling of “sea salt”. In the US, sea salt doesn’t even have to come from the sea. The argument is that all salt came from the sea if you look back far enough. The politics of food; don’t get me started …

My kids really loved Thomas the Tank Engine when they were young. The “Thomas the Tank Engine” television show is based on the series of books by the Reverend W. V. Awdry and his son. The TV series was remarkable in that it attracted some celebrity narrators, the first being ex-Beatle Ringo Starr. I think American audiences might have been more familiar with George Carlin, and then Alec Baldwin. Pierce Brosnan also had a go, narrating a TV special. I remember being on a flight one time with Ringo Starr (we didn’t sit together!). When I told our kids’ babysitter a few days later about my celebrity encounter, she was marginally impressed although I had to explain that he was the drummer for the Beatles. When I added that Ringo was also the narrator for the “Thomas the Tank Engine” show, she nearly fainted with excitement. A generation gap exists …

Mrs. Peacock is a suspect in the game Clue.