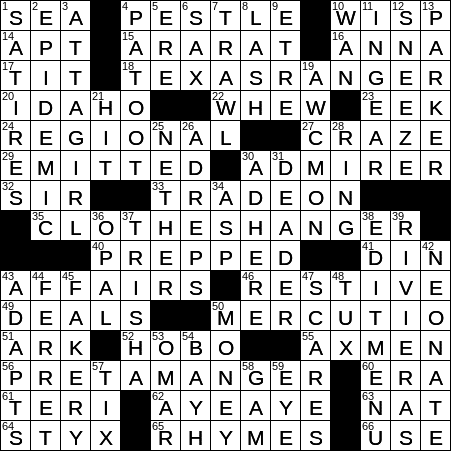 Themed answers end with words that are EYE RHYMES, i.e. words that look like they should rhyme, but don’t:

The Texas Rangers Major League Baseball team is based in Arlington, Texas just outside Dallas. The team was founded as the Washington Senators in 1961, and ended up in Texas in ten years later. The team is named after the famous Texas Rangers law enforcement agency.

56 Sandwich chain whose name is French for “ready to eat” : PRET A MANGER

Pret a Manger is a UK-based chain of sandwich shops that was founded in 1983. The name, more correctly written as “Prêt à Manger”, translates from French as “Ready to Eat”. Founder Jeffrey Hyman chose the name due to its similarity to the French phrase “prêt-à-porter” meaning “ready-to-wear”, as in clothing.

64 River of the underworld : STYX

“Animal Farm” is a 1945 novella written by George Orwell, a satire of life in the Soviet Union under Joseph Stalin. Orwell had trouble getting his novel published in his homeland of the UK during WWII, as anti-Soviet literature wasn’t a good thing to publish while the UK and USSR were on the same side of a World War. In fact, one publisher who was willing to distribute the book changed his mind after being warned off by the British Ministry of Information. Given his experiences, I find it interesting that Orwell should write “Nineteen Eighty-Four” a few years later, and introduce the world to Big Brother.

In the 1726 adventure novel “Gulliver’s Travels” by Jonathan Swift, Gulliver comes across the two islands of Lilliput and Blefuscu in the South Indian Ocean. Both are inhabited by people who are one-twelfth of “normal” size, so Gulliver appears like a giant to them. “Gulliver’s Travels” is well known for its satirical references to real life, and indeed these two islands are poorly disguised satires of Britain (Lilliput) and France (Blefuscu). The two islands were at war, as was constantly the situation with Britain and France.

Is it just me or would “Sex and the City” be so much better off without the two romantic leads, Carrie and Mr. Big? Carrie Bradshaw is played by Sarah Jessica Parker, and Mr. Big (aka John James Preston) is played by Chris Noth. We never found out Mr Big’s first name (John) until the series finale, and his full name wasn’t revealed until the first movie came out.

42 Someone who was literally born yesterday : NEONATE

A neonate is a newborn infant.

50 “A blessing that is of no advantage to us excepting when we part with it,” according to Ambrose Bierce : MONEY

Ambrose Bierce was, among other things, an American satirist. He wrote a satirical lexicon called “The Devil’s Dictionary” published in 1911. The book is still popular today, with an updated version released in 2009. It includes “new” definitions from Bierce that were not included in his original work. Roy Morris, Jr. wrote a biography about Bierce called “Ambrose Bierce: Alone in Bad Company”.

An eye rhyme is a similarity in spelling between two words that look like they should rhyme, but are actually pronounced differently. So, for example, wood “looks like” food, but the words sound quite different. Eye rhymes are sometimes found in older poems. Because pronunciation of words has changed over time, an intended rhyme may not exist today.