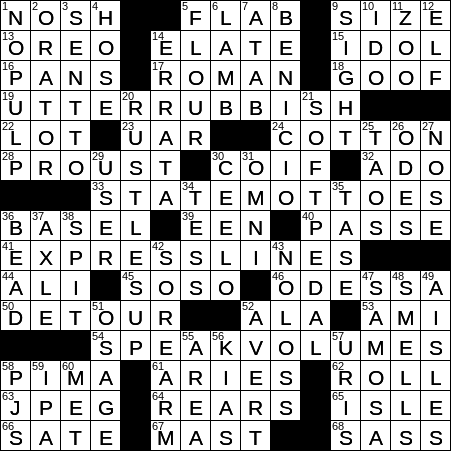 Constructed by: Jules P. Markey
Edited by: Will Shortz

Today’s Theme (according to Bill): Say Something

Themed answers are common phrases reinterpreted to mean “say something”:

1 Little something to eat : NOSH

A McFlurry is an ice cream dessert served in McDonald’s restaurants. A McFlurry is made from soft-serve ice cream to which are added crushed candy bars or cookies. Cleverly, a McFlurry is mixed on a machine with the mixing blade then doubling as a spoon with which one eats it.

The verb “to fawn” has a different etymology to that of the noun “fawn”. The Old English “faegnian” meant “to rejoice, be glad”. In particular, the Old English verb applied to a dog wagging its tail. From there, “to fawn” came to mean “to court favor, to grovel”.

A goof is a mistake. The verb “goof off” was coined in 1941 to mean “make a mistake at drill”. After the war, the meaning extended to describe wasting time, loafing around.

Lot was a nephew of Abraham, with his story appearing in the Book of Genesis. At one point Lot had to flee the doomed city of Sodom with his wife. God gave instructions that the couple should not look back as they left the city, but Lot’s wife disobeyed and she was turned into a pillar of salt.

The United Arab Republic (UAR) was a union between Egypt and Syria made in 1958, and dissolved in 1961 when Syria pulled out of the arrangement.

24 Word with boll or Bowl : COTTON

The Cotton Bowl college football game was played from its inception in 1937 until 2009 at the Texas State Fair Grounds. The game moved to Cowboys Stadium in Arlington, Texas in 2010.

36 Swiss city on the Rhine : BASEL

Muhammad Ali won 56 professional fights, 37 of which were knockouts. He lost 5 fights, 4 being decisions and one being a technical knockout (TKO). The TKO-loss was Ali’s second-last fight, against Larry Holmes. By the time Ali took on Holmes, he was already showing signs of Parkinson’s Syndrome, although the diagnosis would not come until four years later.

“Snake eyes” is the slang term for a roll of two dice in which one pip turns up on each die.

“Boxcars” is a slang term for two sixes rolled on a pair of dice, particularly in the game of craps. The idea is that the twelve pips on the dice resemble a pair of boxcars on a freight train.

2 One on a soapbox : ORATOR

When we run a “tab”, at a bar say, we are running a “tabulation”, a listing of what we owe. Such a use of “tab” is American slang that originated in the 1880s.

The Usual Suspects is somewhat of a cult film now, released in 1995. The cast is amazing, including Gabriel Byrne, Benicio Del Toro, Kevin Pollak and Kevin Spacey. The title comes from one of the most memorable lines in movie history, from the film “Casablanca”. In that 1942 movie, Captain Renault (played by Claude Rains) pronounces, “Major Strasser has been shot. Round up the usual suspects.”

A menagerie is a varied group, and particularly refers to a collection of wild or unusual animals. The term “menagerie“ comes from the French “ménagerie”, which described housing for domestic animals.

20 Prepares on short notice : RUSTLES UP

“CeeLo Green” is the stage name of rapper Thomas DeCarlo Callaway. Apparently Green is one of the coaches for the contestants on the singing TV show “The Voice”. That’s all I need to know …

In the “Dick Tracy” comic strip, Tess Trueheart was Dick’s love interest and later his wife (and still his love interest, I am sure!).

Chutney is a typically southern Asian condiment, made from spices with vegetables or fruit. The term “chutney” comes from the Sanskrit “caṭnī” meaning “to lick”.

58 Attire in which to retire, briefly : PJS