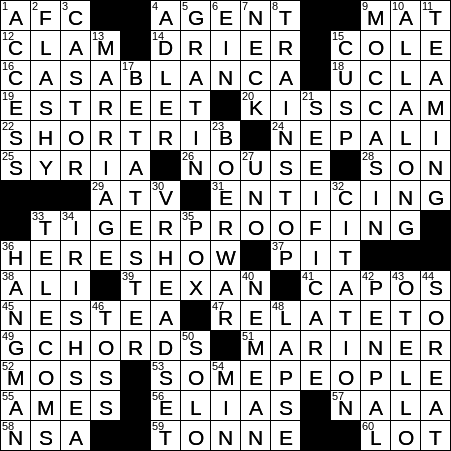 Constructed by: Andy Kravis and Erik Agard
Edited by: Will Shortz

Just like the New York Giants, the New York Jets are based in New Jersey, headquartered in Florham Park. The Jets and the Giants have a unique arrangement in the NFL in that the two teams share Metlife Stadium in East Rutherford, New Jersey. The Jets were an AFL charter team, formed in 1959 as the Titans of New York. The Titans changed their name to the Jets in 1963.

16 Acclaimed 1942 film banned in Germany until after W.W. II : CASABLANCA

The White House was designed by an Irishman, I am proud to say. James Hoban from County Kilkenny emigrated to the US in his twenties, and won the design competition for the White House in 1792.

25 Home of the Unesco World Heritage Site of Palmyra : SYRIA

Palmyra is an ancient city in Syria that became very wealthy as a center of trade during the days of the Roman Empire. Palmyra was attacked and destroyed twice, by the Romans in 273 and by the Timurids in 1400, although it still is home to spectacular ruins of magnificent structures erected during the city’s heyday. This is despite acts of sabotage by Islamic State soldiers who took control of Palmyra several times during the recent conflict in Syria.

The US presidents whose names end with “-son” are:

After Tiger Woods, and other big hitters in the game of golf, started to have an impact on the game, yardage was added to some courses. This was intended to reduce the advantage of those big hitters, and became known as “Tiger-Proofing”.

38 Sports star who once declared “I am America” : ALI

Bryophytes are the collection of terrestrial plants that do not have vascular systems. Bryophytes are mainly the mosses, hornworts and liverworts.

Walt Elias Disney was one of five children, the son of Elias and Flora Disney. Elias was an Irish Canadian, and Flora was from Ohio.

57 Singer of the song “Shadowland” in “The Lion King” : NALA

The castor bean is the seed of the castor oil plant, although it isn’t actually a true “bean”. The castor seed is the source of castor oil, which has several medicinal uses.

4 Richard who composed the music for “Damn Yankees” and “The Pajama Game” : ADLER

In the musical show “Damn Yankees”, the title refers to the New York Yankees baseball team that dominated the sport in the fifties. That said, the show tells the story of the a man who sells his soul to help his beloved Washington Senators team beat the Yankees and win the pennant. So, “Damn Yankees” is yet another version of the classic German legend of “Faust”. The show was written by Richard Adler and Jerry Ross, a production that turned out to be a very successful follow-up to their prior hit, “The Pajama Game”. The future was looking really rosy for Adler and Ross but, sadly, Jerry Ross died of an obstructive lung disease only a few weeks after “Damn Yankees” opened on Broadway in 1955. He was just 29 years old.

To cook “au gratin” is to prepare something in a shallow dish with a crust of bread or cheese on top. In America we tend to think mainly of potatoes prepared this way, but the technique can be used for many different dishes. What we call French onion soup, a soup with some bread and cheese baked on top, is called “gratinée” in France.

17 One looking for bugs : BETA TESTER

33 Sprint and such : TELECOMS

The Isle of Man is a large island located in the middle of the Irish Sea between Great Britain and Ireland. I used to spend a lot of time there in my youth, and a very interesting place it is indeed. The Isle of Man is classed as a British Crown Dependency and isn’t part of the United Kingdom at all. It is self-governing and has its own parliament called the Tynwald. The Tynwald was created in AD 979 and is arguably the oldest continuously-running parliament in the world. The inhabitants of the island speak English, although they do have their own language called Manx, which is very similar to Irish Gaeilge and Scottish Gaelic. And then there are those Manx cats, the ones without any tails. I’ve seen lots of them, and can attest that they are indeed found all over the island.

36 Bad choices in it might cost you an arm and a leg : HANGMAN

The word-guessing game called Hangman seems to have been played first in Victorian England. At one time it was known as “Birds, Beasts and Fishes” as the words to be guessed had to be types of animal.

40 Like the lion slain in Hercules’ first labor : NEMEAN