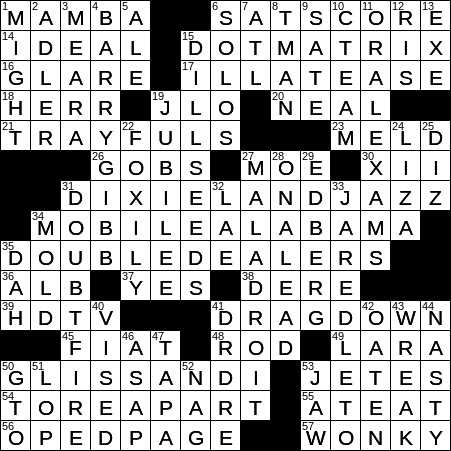 The apotheosis is the ideal example, the epitome. The term is originally Greek, from “apo” meaning “here” and “theos” meaning “god”.

A dot matrix printer works somewhat like an old typewriter. The printer head runs back and forth across the stage striking the paper through an inked ribbon, creating the printed characters from small dots.

“J.Lo” is the nickname of singer and actress Jennifer Lopez. “J.Lo” is also the title of her second studio album, one released in 2001.

Bezique is a French card game that is almost identical to pinochle. Future British Prime Minister Winston Churchill learned to play Bezique while working as a war correspondent during the Boer War. Churchill did like his card games. In 1946 he lost quite bit of money to President Harry Truman while playing poker.

34 City that was the first capital of French Louisiana : MOBILE, ALABAMA

Selfie sticks; oh, how I hate selfie sticks. A walk down the Strip in Vegas is an enlightening exercise in what’s wrong with contemporary photography …

56 It offers a variety of views : OP-ED PAGE

A schooner is a glass of varying capacity, depending on where its used. Over in Britain, a schooner is a large sherry glass. The smaller sherry glass is known as as a clipper, with both names apparently referring to the size of of shops that brought sherry over from Spain. Here in the US, a schooner is usually a beer glass that’s rounded, with a short stem. The size can be anything from 18 oz. to 32 oz.

Ris de veau is the French term for a dish made from calf sweetbreads. Sweetbreads are usually made from the thymus or pancreas.

Often, a dill pickle is actually a pickled gherkin, as the gherkin and cucumber are different cultivars within the same species. Here in the US, dill is commonly added to the pickling vinegar or brine, but this wasn’t the case when I used to eat them back in Ireland (I can’t stand dill!). You might see jars labeled as “cornichons”, but they’re gherkins. “Cornichon” is just the French word for “gherkin”.

Stefan Edberg is a Swedish tennis player, and former world number one. Sadly, one part of Edberg’s legacy is his involvement in a freak accident at the 1983 US Open. A ball struck by Edberg hit one of the linesmen causing him to topple off his chair, fracturing his skull as he hit the ground. That injury was fatal.

To win the Grand Slam of tennis, a player must win the four major tournaments in the same season:

33 Onetime teen idol who went on to win the 2013 Oscar for Best Supporting Actor : JARED LETO

To badger is to harass. The verb “to badger” comes from the cruel practice of badger-baiting, which dates back to medieval times. Badger-baiting is a blood sport in which a dog is used as bait for a badger in its den, to draw it out into the open. The den is an artificial structure built to resemble a natural badgers’ den, complete with a tunnel entrance. The dog is sent down the tunnel causing the badger and dog to lock their jaws on each other. The badger and dog are then removed from the den by pulling on the dog’s tale. Horrible …