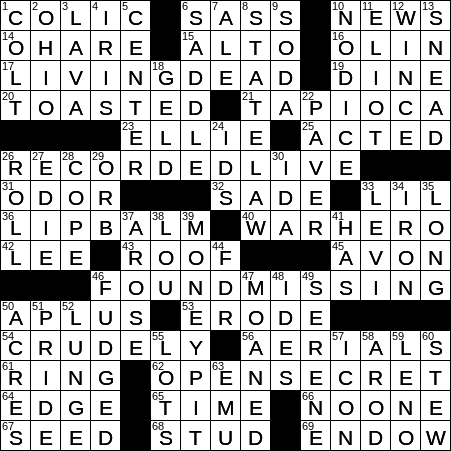 Today’s Theme (according to Bill): Oxymoron

1 Cause of an infant’s crying : COLIC

Baby colic is a condition in which a baby cries for no apparent reason for extended periods. At least one study has shown that breastfed babies are about half as likely to suffer from colic.

Lena Olin is a Swedish actress, and clearly someone who had acting in her blood. Her mother was the actress Britta Holmberg and her father the actor and director Stig Olin. Olin had a very successful career in Sweden, often working with the great Ingmar Bergman. Olin’s breakthrough international and English-speaking role was playing opposite Daniel Day-Lewis in “The Unbearable Lightness of Being” released in 1988. Way back in 1974, the lovely Miss Olin was crowned Miss Scandinavia in a beauty pageant for Nordic women held in Helsinki, Finland. Olin’s most famous performance was in “Chocolat” released in 2000, and then she won an Emmy in 2003 for Best Supporting actress in the TV show “Alias”.

Miss Ellie is the matriarch of the famed Ewing family, around which the TV series “Dallas” was written. For most of the series, Miss Ellie was played by Barbara Bel Geddes, and once in a TV movie of Dallas by Molly Hagan. Barbara Bel Geddes left the show in 1984 and was replaced by the celebrated actress Donna Reed. When Bel Geddes decided to return to the show the following year, Reed was fired. This was much to Reed’s chagrin, and so a lawsuit ensued.

40 Recipient of a Medal of Honor or Purple Heart : WAR HERO

66 Who lives at the North Pole, in reality : NO ONE

The Indianapolis Colts professional football team has been in Indiana since 1984. The team traces its roots back to the Dayton Triangles, one of the founding members of the NFL created in 1913. The Dayton Triangles relocated and became the Brooklyn Dodgers in 1930, and then the Brooklyn Tigers in 1944. The team merged with the Boston Yanks in 1945, so then played in Boston. The Yanks were moved to New York in 1949, and then to Dallas in 1952 as the Dallas Texans. The Texan franchise moved to Baltimore in 1953, forming the Colts. The Colts made their last move in 1984, to Indianapolis. Whew!

2 Separator of Indiana and Pennsylvania : OHIO

4 Colored part of the eye : IRIS

“To geld” is to castrate a male animal. “Geld” comes from the Old Norse word “gelda” meaning “castrate”.

22 One finishing a road : PAVER

Back in Ireland, the “pavement” is what we call the “footpath” (because the footpath is “paved”, often with “paving” stones!). It’s very confusing when you arrive in this country from Ireland, and a little dangerous when one has been taught from a young age to “walk on the pavement” …

“Skip to My Lou” is a children’s dance that can also be used at a barn dance as an icebreaker. Couples dance to the tune, with an extra male in the middle of the group. The odd man “steals” a lady with whom to dance, leaving her partner to find another. The word “lou” is the Scottish for “love”.

Professional baseball player Alex Rodriguez earned more nicknames than just “A-Rod”. He has been called “the Cooler” by some players as there was a perception that teams went cold when he joined them and hot when he left. He has also been called “A-Fraud” by teammates because of another perception, that he is over-demanding. Rodriguez was in a world of hurt not so long ago, for using illegal performance-enhancing drugs. He retired from the baseball in 2016.

Ratatouille is a lovely vegetable dish from France. It gets its name from the French word “touiller” meaning “to stir up”.

63 Relative of an ostrich : EMU