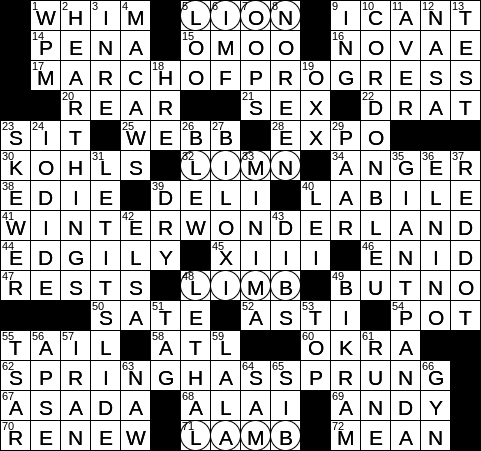 The circled letters in today’s grid define a word ladder taking us from LION to LAMB, which is a reference to the month of MARCH “coming in like a LION, out like a LAMB”:

Also, the starting words in themed answers MARCH from WINTER to SPRING:

César Chávez was a Mexican American farm worker, and co-founder of the union today known as the United Farm Workers. Chávez was born in Yuma, Arizona, but moved to California as a child with his family. He never attended high school, dropping out to become a full-time migrant farm worker. In 1944, at 17 years of age, he joined the US Navy and served for two years. 5-6 years after returning from the military, back working as a farm laborer, Chávez became politically active and rose to national attention as an articulate union leader during some high profile strikes. He is remembered annually here in California on his birthday, March 31, which is a state holiday.

Herman Melville mined his own experiences when writing his novels. Melville sailed from New Bedford, Massachusetts in 1841 on a whaler heading into the Pacific Ocean (a source for “Moby-Dick”). Melville ended up deserting his ship 18 months later and lived with natives on a South Pacific Island for three weeks (a source for “Typee”). He picked up another whaler and headed for Hawaii, where he joined the crew of a US navy frigate that was bound for Boston (a source for “Omoo”).

To limn is to describe, or portray in a painting or a drawing. “Limn” has the same root as “illuminate”, in the sense of illuminating a manuscript.

45 Lowest number not found on a grandfather clock : XIII

Enid, Oklahoma takes its name from the old railroad station around which the city developed. Back in 1889, that train stop was called Skeleton Station. An official who didn’t like the name changed it to Enid Station, using a character from Alfred Lord Tennyson’s “Idylls of the King”. Maybe if he hadn’t changed the name, the city of Enid would now be called Skeleton, Oklahoma! Enid has the nickname “Queen Wheat City” because is has a huge capacity for storing grain, the third largest grain storage capacity in the world.

Even though jai alai is often said to be the fastest sport in the world because of the speed of the ball, in fact golf balls usually get going at a greater clip. Although, as a blog reader once pointed out to me, you don’t have to catch a golf ball …

3 Latin phrase on memos : IN RE

Macaws are beautifully colored birds of native to Central and South America, and are actually a type of parrot. Most species of macaw are now endangered, with several having become extinct in recent decades. The main threats are deforestation and illegal trapping and trafficking of exotic birds.

40 Gift for a ukulele player : LEI

A transept is a transverse section that crosses the main body of a building. Transepts are important features in many Gothic Christian churches, which often have a cross-shaped floor plan.

61 Part of a Viking message : RUNE

The Vikings were a Germanic people from northern Europe who were noted as great seafarers. Key to the success of the Vikings was the design of their famous “longships”. Made from wood, the longship was long and narrow with a shallow hull, It was also light, so that the crew would actually carry it small distances over land and around obstacles. Longships were designed to be propelled both by sail and by oars.

Sam Smith is a singer from London. I think that the only recording I’ve heard of his is “Writing’s on the Wall”, which is the theme song from the 2015 James Bond movie “Spectre”.