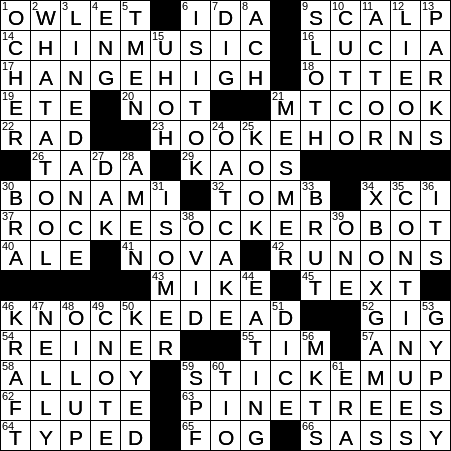 Themed answers are phrases including the word ‘EM. That ‘EM is written in the UP-direction, i.e. the M is above the E:

Heavens Gate Lookout is a viewpoint in Idaho’s Hell’s Canyon. The viewpoint has spectacular views of the canyon and the Seven Devils Mountains.

30 Cleaner brand with the slogan “Hasn’t scratched yet!” : BON AMI

40 Something much sold on St. Patrick’s Day : ALE

A microphone is sometimes referred to as a “mike” or “mic”.

54 Rob who directed “This Is Spinal Tap” : REINER

Tim Duncan is a professional basketball player from La Croix in the US Virgin Islands. Duncan was a natural swimmer, with his eyes on the 1992 Olympic Games. He was forced to turn his attention to basketball when Hurricane Hugo destroyed St. Croix’s only Olympic-sized pool in 1989.

The HJ Heinz Company is an American concern that is based in Pittsburgh, Pennsylvania. The company was founded in 1869 by Henry John Heinz. It was Heinz himself who came up with the marketing slogan of “57 Varieties”. The “57” really doesn’t have any relevance to the range of products available as Heinz chose the “5” because it was his lucky number, and the “7” because it was his wife’s lucky number.

Benjamin Franklin is featured on one side of the hundred-dollar bill (also called a “C-spot, C-note, benjamin”), and Philadelphia’s Independence Hall on the other side. There is a famous error in the image of Independence Hall. If you look closely at the clock face at the top of the building you can see that the “four” is written in Roman numerals as “IV”. However, on the actual clock on Independence Hall, the “four” is denoted by “IIII”, which has been the convention for clock faces for centuries.

53 Hit musical with the song “Everything’s Coming Up Roses” : GYPSY