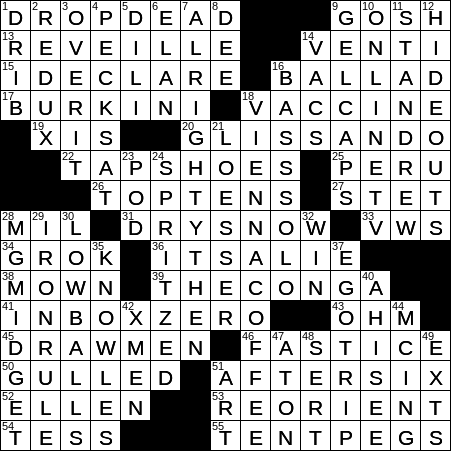 Hades was the god of the underworld to the ancient Greeks. Over time, Hades gave his name to the underworld itself, the place where the dead reside. The term “Hades” was also adopted into the Christian tradition, as an alternative name for hell. But, the concept of hell in Christianity is more akin to the Greek “Tartarus”, which is a dark and gloomy dungeon located in Hades, a place of suffering and torment.

16 Coleridge’s “The Rime of the Ancient Mariner,” for one : BALLAD

17 Modest article of swimwear with a portmanteau name : BURKINI

A burkini is a woman’s swimsuit that covers almost all of the body, leaving just the face, hands and feet visible. The burkini was created by Lebanese-born Australian fashion designer Aheda Zanetti, with the intent of providing clothing in accord with the Islamic tradition of modest dress. The term “burkini” is a portmanteau of “burqa” and “bikini”.

Peru’s name comes from the word “Biru”. Back in the early 1500s, Biru was a ruler living near the Bay of San Miguel in Panama. The territory over which Biru ruled was the furthest land south in the Americas known to Europeans at that time. The Spanish conquistador Francisco Pizarro was the first European to move south of Biru’s empire and the land that he found was designated “Peru”, a derivative of “Biru”.

The Volkswagen Golf used to be sold as the Volkswagen Rabbit here in North America. The Golf was introduced in 1974 as a front-wheel drive replacement for the hugely successful Volkswagen Beetle.

39 Partygoers may get a kick out of it : THE CONGA

51 When to wear a cocktail dress, traditionally : AFTER SIX

A sheath dress is designed to fit close to the body, with a length that falls just above or below the knee. A shorter version of the sheath dress is known as a cocktail dress.

54 Trueheart of the comics : TESS

In the “Dick Tracy” comic strip, Tess Trueheart was Dick’s love interest and later his wife (and still his love interest, I am sure!).

A drib is a negligible amount, as in “dribs and drabs”. The term “drib” arose in Scotland in the 18th century, and might possibly come from the verb “to dribble”.

The adjective “redux” means “returned, brought back”, and is derived from the Latin “reducere” meaning “to lead back, to bring back”.

The last letter in the word “grand” is a letter D (dee).

Frank Loesser was a songwriter who was famous for penning both lyrics and music for the Broadway show “Guys and Dolls” and “How To Succeed In Business Without Really Trying”. Loesser also wrote the marvelous song “Baby, It’s Cold Outside”.

“Guys and Dolls” is a musical with music and lyrics by Frank Loesser. It was first produced on Broadway, in 1950, and ran for 1200 performances. The show was based on a book written by Jo Swerling and Abe Burrows, which book was inspired by the short stories :The Idyll of Miss Sarah Brown” and “Blood Pressure” by Damon Runyon. “Guys and Dolls” was chosen as winner of a Pulitzer in 1951, but the award was cancelled as Abe Burrows was having problems with the House Un-American Activities Committee at the time.

1 “Go to Hades!” : DROP DEAD!
9 “Goodness me!” : GOSH!
13 Wake-up call : REVEILLE
14 XX, in Italy : VENTI
15 “Goodness me!” : I DECLARE!
16 Coleridge’s “The Rime of the Ancient Mariner,” for one : BALLAD
17 Modest article of swimwear with a portmanteau name : BURKINI
18 Medical breakthrough : VACCINE
19 Sorority letters : XIS
20 Pianist’s finger-sliding : GLISSANDO
22 Clickers? : TAP SHOES
25 Major exporter of artichokes and gold : PERU
26 Hit lists? : TOP TENS
27 Decide not to take out : STET
28 Significant investment, informally : MIL
31 Oxymoronic skiing condition : DRY SNOW
33 Golfs, for example : VWS
34 Understand intuitively : GROK
36 Dramatic courtroom outburst : IT’S A LIE!
38 Like fairways : MOWN
39 Partygoers may get a kick out of it : THE CONGA
41 Goal of having no unread emails : INBOX ZERO
43 Bit of resistance : OHM
45 Some workers who stretch plastic materials : DRAWMEN
46 Freeze that extends out from a coastline : FAST ICE
50 Took in : GULLED
51 When to wear a cocktail dress, traditionally : AFTER SIX
52 Page in a film guide : ELLEN
53 Adjust, in a way : REORIENT
54 Trueheart of the comics : TESS
55 Common camping equipment : TENT PEGS