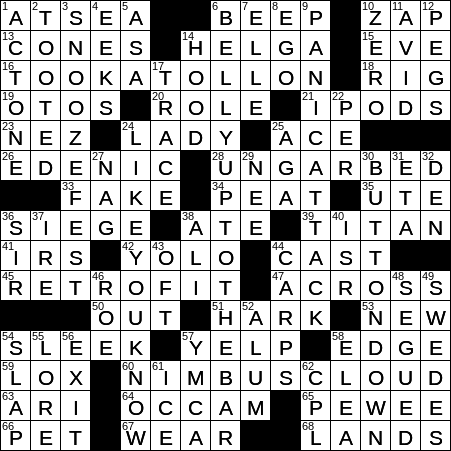 Themed answers are each in the DOWN-direction, and each starts with a type of BUTTON:

“Carpe diem” is a quotation from Horace, one of Ancient Rome’s leading lyric poets. “Carpe diem” translates from Latin as “seize the day” or “enjoy the day”. The satirical motto of a procrastinator is “carpe mañana”, “translating” as “seize tomorrow”.

Lox is brine-cured salmon fillet that is finely sliced. The term “lox” comes into English via Yiddish, and derives from the German word for salmon, namely “Lachs”.

Nimbus clouds are rain clouds, with “nimbus” being the latin word for “cloud”. Some other types of cloud can take on the prefix nimbo- or suffix -nimbus, indicating that they are similar to that other cloud type but carry precipitation. So, a stratus cloud that has rain is called nimbostratus, and cumulus cloud with rain is called cumulonimbus.

63 The Cardinals, on scoreboards : ARI

65 Bird in the flycatcher family : PEWEE

A pewee is a small bird, so called because of the “pee wee” sound that it makes.

We use the word “vestige” for a trace, mark or sign. The term comes from the Latin “vestigium” that also means trace, as well as footprint.

The insulting word “ignoramus”, describing an ignorant person, comes to us directly from Latin. The term translates from Latin as “we ignore”, the first person, plural tense of “ignorare”.

30 Very conventional … or a hint to the starts of the answers to the four starred clues : BUTTON-DOWN

Something described figuratively as “button-down” is very conventional and unimaginative. The idea is that someone opting for a shirt with a button-down collar might be described as conventional.

The country of Sweden emerged during the Middle Ages, and became one of the great powers of Europe in the days of the Swedish Empire in 17th and early 18th century. Since then Sweden’s influence has waned. What was the eastern part of Sweden was lost to Russia in the early 1800s, and is now modern-day Finland. In the 20th century Sweden has adopted a very non-aggressive stance and was neutral in both World Wars. Sweden is not a member of NATO, but is a member of the European Union, although the country does not use the euro as its currency.