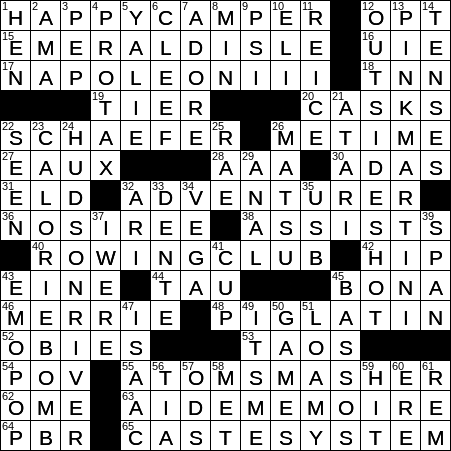 Perrier is bottled from spring water that is naturally carbonated. The natural carbonation is lost during the purification process, and so has to be restored artificially before bottling. The spring used by Perrier is in the South of France, and has been used since Roman times as a spa.

28 Source of a motel discount, in brief : AAA

30 Some prosecutors, for short : ADAS

32 Many a Jules Verne protagonist : ADVENTURER

The leading letter in the word “Troy” is a letter (tee), which is equivalent to a Greek letter tau.

In Pig Latin, “be” becomes “EBay” and “trash” becomes “ashtray”.

55 The world’s largest one straddles the border of France and Switzerland : ATOM SMASHER

Nowadays, we call an “atom smasher” a “particle accelerator”. An accelerator creates highly focused beams of fast-moving ions that can be “smashed” into various atoms. Those collisions can produce new particles. Important work, I hear …

“I Am a Camera” is a 1951 play written by John Van Druten. The play is an adaptation of the novel “Goodbye to Berlin” by Christopher Isherwood. In turn, “I Am a Camera” was adapted into the musical “Cabaret”.

Actor Lee Van Cleef played a great “baddie”. Van Cleef was born in Somerville, New Jersey and was of Dutch ancestry.He played a movie villain from day one of his film career, starting out with a small role in the classic western “High Noon”. His career went on hiatus after a car accident in the late fifties, but took off again with the arrival of the spaghetti Western. Lee Van Cleef vs. Clint Eastwood … what could be better?

24 One end of the Erie Canal : HUDSON RIVER

34 Star in the Summer Triangle : VEGA

45 Players of Fiorello and Dr. Bartolo in “The Barber of Seville” : BASSOS

Bob Marley is the most widely-known reggae performer, with big hits such as “I Shot the Sheriff”, “No Woman, No Cry” and “One Love”. A little sadly perhaps, Marley’s best selling album was released three years after he died. That album would be the “legendary” album called “Legend”.