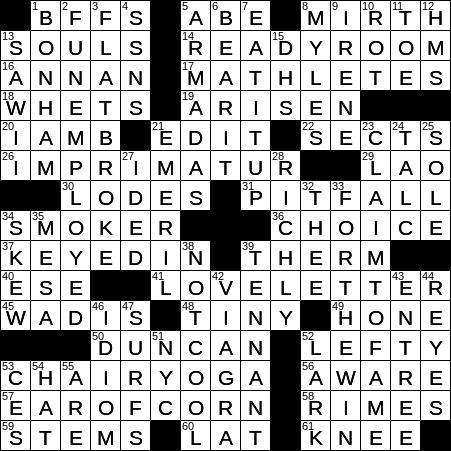 Shinzo Abe first became Prime Minister of Japan in 2006, at which time he was the youngest person to hold the post since WWII and was the first PM born after the war. Abe was in office for less than a year, but was voted in again in 2012. Abe is usually characterized as a right-wing nationalist.

Kofi Annan was a diplomat from Ghana who served as General Secretary of the UN for ten years until the beginning of 2007. Annan was born into an aristocratic family, and had a twin sister named Efua Atta. Efua and Kofi shared the middle name “Atta”, which means “twin” in the Akan language of Ghana. Annan attended the MIT Sloan School of Management from 1971-72, and graduated with a Master of Science degree.

An iamb is a metrical foot containing an unstressed syllable followed by a stressed syllable. The lines in Robert Frost’s “Stopping by the Woods on a Snowy Evening” use four sequential iambs, e.g. “Whose woods / these are / I think / I know”. With that sequence of four iambs, the poem’s structure is described as iambic tetrameter.

“Shakers” is the common name for the religious sect more properly called the United Society of Believer in Christ’s Second Appearing. The sect’s doctrine was based on the teachings of Ann Lee.

A therm is a unit of heat energy. One therm is equivalent to 100,000 British thermal units (BTUs).

Nottingham is a city in the East Midlands of England. To us on this side of the Atlantic, perhaps Nottingham is most famous as a setting for the legend of Robin Hood.

“Wadi” is an Arabic term referring to a valley, or perhaps a (mostly) dry riverbed. In English we might call this a wash, or in Spanish an “arroyo”.

A southpaw is a left-handed person. The term “southpaw” arose as baseball slang in the mid-1880s to describe a left-handed pitcher. Back then, baseball diamonds were often laid out with home plate to the west. So, a pitcher’s left hand would be on his “south” side as he faced the batter.

Led Zeppelin was an English rock band founded in 1968. The band’s most famous release has to be the classic “Stairway to Heaven”. Led Zeppelin broke up right after drummer John Bonham was found dead in 1988.

Myles Standish was one of the passengers on the Mayflower He had been hired by the Pilgrims as military advisor for their planned colony in the New World. Standish served as commander of the Plymouth Colony from its founding until his passing in 1656, at the age of 72.

Along with her husband Frederick, Irene Joliot-Curie was awarded the Nobel Prize for chemistry in 1935 for their discovery of artificial radioactivity. Irene was the daughter of Marie and Pierre Curie, who also won Nobel Prizes. Irene died when she was 58 years old, suffering from leukemia brought on her exposure to high doses of radiation. Her mother, Marie, died from aplastic anemia, also caused by high exposure to radiation. To this day, Marie’s personal papers are kept preserved in lead-lined boxes as they are highly radioactive, even her personal cookbook.

“Bushwa” is “rubbish, nonsense, rot”. The term originated in the early 1900s and may be a derivative of “bourgeois”.

The group of flatfish known as soles take their name from “solea”, the Latin word for “sandal”. And, they kind of have that shape.

32. Pronoun in both “America” and “America the Beautiful” : THEE

Canyonlands is a magnificent national park in southeast Utah not far from Moab. The canyons in the park, and the associated mesas and buttes, were formed mainly by the Colorado and Green Rivers.

The iconic science-fiction television show “Doctor Who” first aired in 1963 on the BBC, and relaunched in 2005. The relaunched series is produced in-house by the BBC in Cardiff in Wales, the location that is the setting of the successful “Doctor Who” spin-off called “Torchwood”. The new show is about the Cardiff branch of the Torchwood Institute which investigates incidents involving extraterrestrials. And, “Torchwood” is an anagram of “Doctor Who”.

Larks are small songbirds that are found all over the world, although only the horned lark species is found here in North America. Despite their size, larks are sometimes considered game birds, and can be served up as food. It’s not uncommon to find a dish containing lark meat in southern Europe.

I think a bowler hat is usually called a derby here in the US. The bowler was first produced in 1849 in London by hatmakers Thomas and William Bowler, hence the name. The alternative name of “derby” comes from the tradition of wearing bowler hats at the Derby horse race (a major race held annually in England).