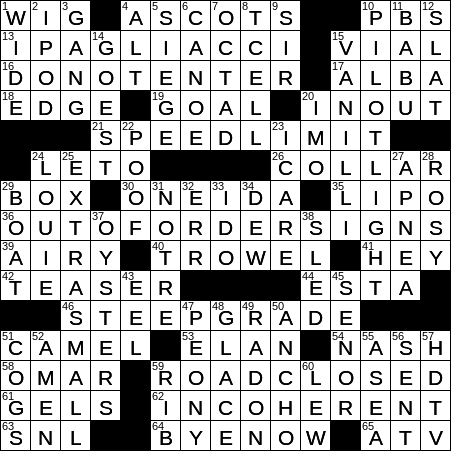 Themed clues are anagrams of common SIGNS seen while driving:

13 Opera that famously ends with the line “La commedia è finita!” : I PAGLIACCI

“Dark Angel” is a sci-fi series that ran from 2000 to 2002, and gave the star Jessica Alba her big break as an actress. Alba plays a genetically-enhanced super-soldier in post-apocalyptic Seattle. The show is a creation of celebrated producer and director James Cameron.

30 One of the five founding nations of the Iroquois Confederacy : ONEIDA

2 Product whose introduction was music to people’s ears? : IPOD

5 The Alamo had a famous one : SIEGE

Sir Toby Belch is a much loved character in William Shakespeare’s “Twelfth Night”.

24 When repeated, a classic of garage rock : LOUIE

“Louie Louie” is an R&B song that was most famously a hit for the Kingsmen in 1963. The Kingsmen were accused of deliberately slurring words in the song that were describing the sexual act. There was even a 31-month investigation by the FBI, after which it was concluded that the accusation was unfounded.

33 Court oath affirmation : I DO

Do you solemnly (swear/affirm) that you will tell the truth, the whole truth, and nothing but the truth, (so help you God/under pains and penalties of perjury)?

49 Heaviest of the noble gases : RADON

Spareribs are so called because “spare” can indicate the absence of fat.