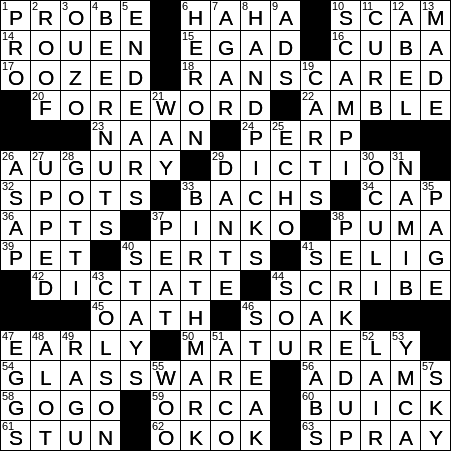 Today’s Theme (according to Bill): Pre-answer

Themed answers come in pairs that are side-by-side in the grid. The first answer of each pair is defined by the second answer prefixed by “pre-”:

14 City whose cathedral is the subject of a series of Monet paintings : ROUEN

24 One who gets booked, informally : PERP

After WWII, the United States went through what was called a “Red Scare”, the fear of communist infiltration in American society and government. Senator Joseph McCarthy became a lightning rod for this movement when he chaired Senate hearings in the fifties designed to root out communist infiltrators. The period (1947-1956) is referred to as the Second Red Scare. The First Red Scare was at its height in 1919-1920, and was a fear of Bolshevism that arose after the Russian Revolution.

The original go-go boot from the sixties comes to the knee and has a low heel. Prior to the sixties, boots really weren’t worn much by women other than as protection against bad weather. Now they are a fashion statement.

10 Dish that can give you garlic breath : SCAMPI

The Italian dish known as “scampi” is a serving of shrimp in garlic butter and dry white wine.

Abel Ferrara is a screenwriter and film director noted for his work on independent movies. Ferrara’s best-known film is probably the 1990 crime drama “King of New York” starring Christopher Walken.

The Namib Desert is in Namibia, as one might expect, and and also stretches into part of Angola. It is thought to be the oldest desert in the world, having been arid for over 55 million years.

49 Italian word with a grave accent that becomes a brand name with an acute accent : RAGU