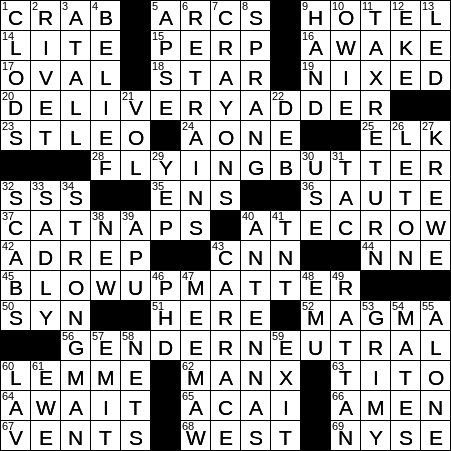 Themed answers are common phrases in which an -ress suffix has been changed to -er:

“Fuzz” is a corruption of “force” as in “police force”.

A marquee is a large sign that is placed over the entrance to a theater. The marquee usually displays the names of the film or play currently showing, as well as the principal actors performing.

The Super Bowl is used for high-profile advertising because of the high viewership numbers. For example, Super Bowl XLIX (2015) had an average audience of 114 million viewers, making it the most-watched American TV program in history.

52. Lava below the surface : MAGMA

After serving in the navy in WWII for three years, musician Tito Puente studied at Juilliard, where he got a great grounding in conducting, orchestration and theory. Puente parlayed this education into a career in Latin Jazz and Mambo. He was known as “El Rey” as well as “The King of Latin Music”.

7. Boxful for a kindergartner : CRAYONS

“Krewe” is the name given to the organization responsible for putting on parades and balls during Carnival celebrations, the most famous being the krewe that pulls together Mardi Gras in New Orleans.

\“Ph.D.” is an abbreviation for “philosophiae doctor”, Latin for “teacher of philosophy”. Often, candidates for a PhD already hold a bachelor’s and a master’s degree, so a PhD might be considered a “third degree”.

61. Homophone of “you” that shares no letters with it : EWE