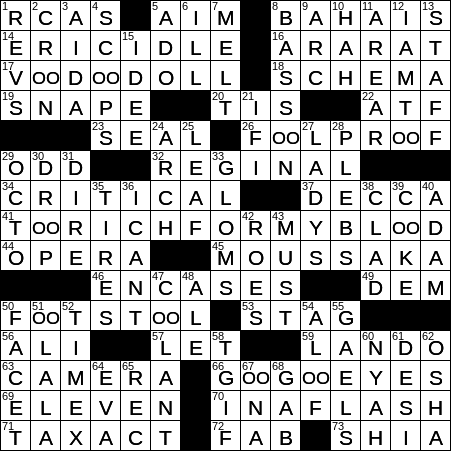 The hit musical “Spamalot” is a show derived from the 1974 movie “Monty Python and the Holy Grail”. In typical Monty Python style, the action starts just before the curtain goes up with an announcement recorded by the great John Cleese:

(You can) let your cell phones and pagers ring willy-nilly … (but) be aware there are heavily armed knights on stage that may drag you on stage and impale you.

Severus Snape is a character in the Harry Potter novels. He was played by the wonderful Alan Rickman on the big screen.

Decca Records started out in 1929 as a British record label. The US branch of Decca was opened up in 1934, but the UK and US entities went their separate ways starting in WWII. Famously, Decca turned down a chance to record the Beatles in 1962 taking the position “Guitar groups are on the way out”. That said, Decca did sign the Rolling Stones.

Stag beetles are so called as the males of the species have large mandibles that resemble the antlers of stags.

Would that be tennis?

“Lickety-split” is the latest in a line of terms that come from the word “lick”, which was used in the sense of a “fast sprint in a race” back in the early 1800s. From “lick” there evolved “licketie”, “lickety-click”, “lickety-cut” and finally “lickety-split”, all just colorful ways to say “fast”.

“Aida” is a famous opera by Giuseppe Verdi that is based on a scenario written by French Egyptologist Auguste Mariette. Mariette also designed the costumes and stages for the opening performance. The opera was first staged in 1871 in an opera house in Cairo. In the storyline, Aida is an Ethiopian princess brought into Egypt as a slave. Radames is an Egyptian commander who falls in love with her, and then complications arise!

8. Instrument that opens Stravinsky’s “The Rite of Spring” : BASSOON

The composer Igor Stravinsky’s most famous works were completed relatively early in his career, when he was quite young. His three ballets “The Firebird”, “Petrushka” and “The Rite of Spring” were published in 1910-1913, when Stravinsky was in his early thirties.

The Timex Group, the manufacturer of watches, evolved from the Waterbury Clock Company that was founded in 1854 in Waterbury, Connecticut. The company achieved tremendous success in the early sixties largely due to an innovative marketing campaign. Advertisements featured the memorable tagline “Timex – Takes a licking and keeps on ticking”. In 1962, one out of every three watches sold in the US was a Timex.

EVA Airlines is an international airline based Taipei, Taiwan that was founded in 1989. The intended name for the company was Evergreen Airways, but this was changed to EVA to avoid a potential conflict with another business.