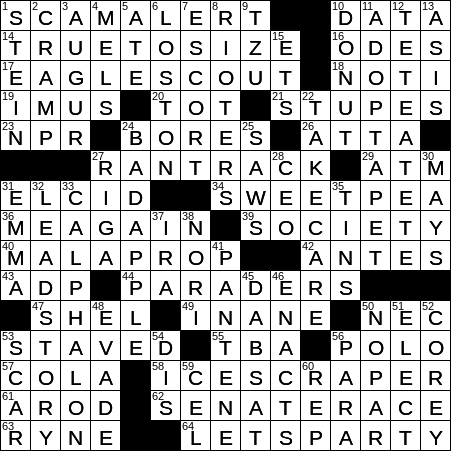 10. Stuff to collect and crunch : DATA

17. Neil Armstrong or Steven Spielberg, as a teen : EAGLE SCOUT

Neil Armstrong was the most private of individuals. You didn’t often see him giving interviews, unlike so many of the more approachable astronauts of the Apollo space program. His famous, “That’s one small step for (a) man, one giant leap for mankind” statement; that was something that he came up with himself, while Apollo 11 was making its way to the moon.

Don Imus’s syndicated radio show “Imus in the Morning” used to broadcast from New York City. Imus has been described as a “shock jock”, a disc jockey who deliberately uses provocative language and humor that many would find offensive . I’m not a big fan of shock jocks …

Howard Stern is one of the original “shock jocks” who seems now to have found his niche on uncensored satellite radio (SiriusXM).

“The Rivals” is a play written by Richard Brinsley Sheridan, first performed in 1775. The character, Mrs. Malaprop, takes her name from her habit of misspeaking, to great comical effect. Malapropism is the substitution of a word for a word with a similar sound. For example, Mrs Malaprop says, “she’s as headstrong as an allegory on the banks of the Nile” (substituting allegory for alligator).

Automatic Data Processing (ADP) is an enterprise based in Roseland, New Jersey that provides business services to companies.

Author Shel Silverstein had a varied career and did a lot more than write books. Silverstein was a poet, composer, cartoonist and screenwriter among other things. One of his successful children’s books is “A Light in the Attic”, a collection of poems that first published in 1981. Some parents have tried to get the book banned from libraries. The collection includes the poem “How Not to Have to Dry the Dishes”, which encourages disobedience and making a mess. Scandalous …

PEZ is an Austrian brand of candy sold in a mechanical dispenser. Famously, PEZ dispensers have molded “heads”, and have become very collectible over the years. The list of heads includes historical figures like Betsy Ross and Paul Revere, characters from “Star Wars” and “Star Trek”, and even British royalty like the Duke and Duchess of Cambridge (“William and Kate”). The name PEZ comes from the first, middle and last letters of “Pfefferminz”, the German word for “peppermint”.

Mariano Rivera is a professional baseball pitcher from Panama City. Rivera played for the New York Yankees from 1995 until his retirement at the end of the 2013 season. Rivera holds the league record for the most career saves (at 652). He is known by the nicknames “Mo” and “Sandman”.

63. Sandberg at second base : RYNE

Ryne “Ryno” Sandberg is a former second baseman who played most of his career for the Chicago Cubs. Sandberg holds the major league fielding percentage record at second base.

Florence Jean “Flo” Castleberry was a waitress in the sitcom “Alice” which aired on CBS in the 70s and 80s. Flo got her own sitcom (called “Flo”) which had a brief run in the early 80s. I saw a few episodes of “Alice”, but that’s about it. Flo was played by Polly Holliday.

Adopt-a-Pet.com is a non-profit website that maintains a website of adoptable pets from over 12,000 pet shelters across North America.

The Gulf of Riga is a bay in the Baltic Sea that lies between Latvia and Estonia.

38. Seaweed in a sushi restaurant : NORI

59. Film picture not shot with a camera : CEL