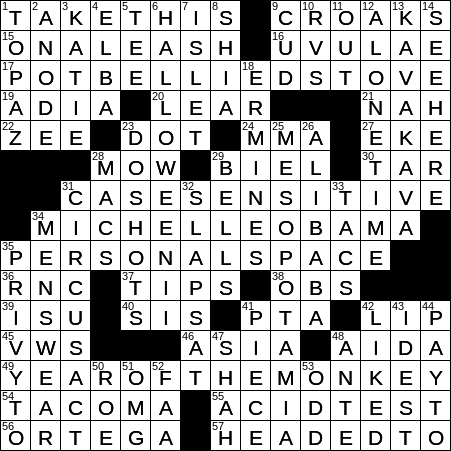 Constructed by: Erik Agard & Paolo Pasco
Edited by: Will Shortz

The third letter in the word “dozen” is a letter Z (zee).

National leadership of the Republican Party is provided by the Republican National Committee (RNC). Only one chairperson of the RNC has been elected to the office of US president, and that was George H. W. Bush.

“Harper Valley PTA” is a country song that was a hit for Jeannie C. Riley in 1968. The song tells of a widowed mother of a teenage girl who is labelled by the daughter’s school’s PTA as scandalous, primarily for wearing a short hemline. The hit song was parlayed into successful 1978 comedy film starring Barbara Eden (of “I Dream of Jeannie”). The movie was successful enough to spawn a TV series, with Barbara Eden again taking the lead. But, the sitcom just made it through two seasons before being pulled from the schedules.

46. What one of the five Olympic rings stands for : ASIA

Mount Rainier is an active volcano in the state of Washington in the Cascade Mountain Range. Native Americans first called the peak “Tacoma” meaning “mother of waters”. When Captain George Vancouver discovered Puget Sound in 1792, he named the peak in honor of his friend Rear Admiral Peter Rainier. There have been movements to change the name back to Tacoma, but these seem to have petered out (pun!).

8. Much of the population of Iran : SHIA

25. Where writing is believed to have been invented : MESOPOTAMIA