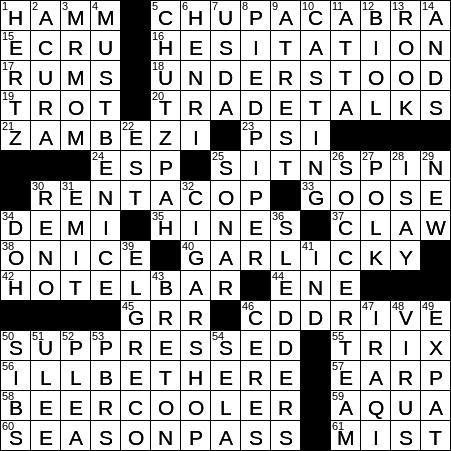 The shade ecru is a grayish, yellowish brown. The word “ecru” comes from French and means “raw, unbleached”. “Ecru” has the same roots as our word “crude”.

A wave function in quantum mechanics is usually denoted with the Greek letter psi. A wave function is a mathematical function that describes the quantum state of a particle and how it behaves.

24. Having someone’s thoughts in mind? : ESP

The toy called a Sit ‘n Spin was made by Kenner toys. It consisted of two circular discs, one on top of the other. One disc is the base of the toy that sits on the ground, and a child sits on the second disc … and spins …

“Rent-a-Cop” is a 1988 movie starring Burt Reynolds and Liza Minnelli. Minnelli plays a prostitute who falls in love with a security guard and one-time police officer, who is played by Reynolds. Interestingly, even though the storyline is set in Chicago, most of the filming was done in Italy. “Rent-a-Cop” wasn’t received well by the critics and both lead actors ended up that years as nominees for a Golden Raspberry Award.

To goose is to prod into action, albeit a little rudely. A “goose” is a prod or a pinch in the rear end.

“I’ll Be There” was a chart topper for the Jackson 5 in 1970. Mariah Carey recorded a cover version in 1992 as a duet with Trey Lorenz. Carey and Lorenz sang the song as a tribute at Michael Jackson’s memorial service in 2009.

57. Role for Hugh O’Brian on TV and Kevin Costner in film : EARP

Cerulean is a blue color, with the name probably coming from the Latin “caeruleus” meaning “blue”.

“Mr. Mom” is a 1983 comedy written by John Hughes and starring Michael Keaton and the great Teri Garr. The movie is all about an engineer in the auto industry in Detroit who loses his job and then takes over the running of the household while his wife heads back to work. It’s funny stuff …

5. Arguing with God, for example : CHUTZPAH

The US Department of Agriculture (USDA) actually dates back to 1862 when it was established by then-president Abraham Lincoln. Lincoln referred to the USDA as the “people’s department” as our economy had such a vast agrarian base back then.

The legend of the Pied Piper of Hamelin dates back to medieval times. Recently there have been suggestions that the story is rooted in some truth, that the town of Hamelin did in fact lose many of its children, perhaps to plague. The suggestion is that the tale is an allegory. The use of the word “pied” implies that the piper dressed in multi-colored clothing.

25. One method of locating schools : SONAR

Those would be schools of fish.

27. Apt surname for an acupuncturist? : POLK

Bobsleds are so called because competitors in the sport originally would “bob” in and out of the sled in order to increase its speed.

Cape Breton is a headland, and is the easternmost extremity of Cape Breton Island in Nova Scotia.

In Greek mythology, Demeter is the goddess of the harvest. Her Roman equivalent is Ceres.

The actress Sela Ward turns up in crosswords a lot. Ward played Teddy Reed in the TV show “Sisters” in the nineties, and was in “Once and Again” from 1999-2002. I don’t know either show, but I do know Ward from the medical drama “House” in which she played the hospital’s lawyer and Greg House’s ex-partner. That was a fun role, I thought. More recently, Ward played a lead role on “CSI: NY” and was a very welcome and much-needed addition to the cast. And, Ward played Dr. Richard Kimble’s murdered wife in the 1993 film version of “The Fugitive”.