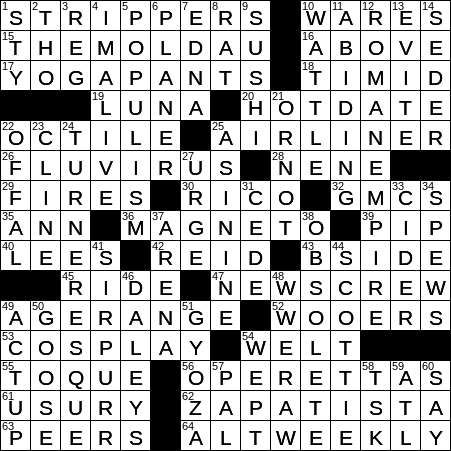 15. Smetana composition inspired by a river : THE MOLDAU

The Vltava is the longest river in the Czech Republic. We might perhaps know the river as “the Moldau”, which is its German name, as we might be familiar with the symphonic poem called “The Moldau” by Bedřich Smetana.

The Boeing 777 was introduced in 1995, when ti was the company’s first fly-by-wire airliner. It has been tremendously successful, with Boeing receiving more orders for the 777 than any other model.

Influenza (flu) is an ailment that is caused by a virus. The virus is readily inactivated by the use of soap, so washing hands and surfaces is especially helpful in containing flu outbreaks.

28. Creature that can walk on lava : NENE

Those would be lava plains.

The GMC Sierra truck is also sold as the Chevrolet Silverado.

In the Marvel Comics universe, Magneto is a powerful mutant and an enemy of the X-Men. As his name implies, Magneto’s superhuman ability is that he can generate and control magnetic fields. Magneto has been portrayed on the big screen in the “X-Men” series of films by Sir Ian McKellen, and by Michael Fassbender.

42. Former Senate majority leader who was once an amateur boxer : REID

Democrat Harry Reid was the Senate Majority leader from 2007 until 2015. Reid had a big day in the Senate from a Democratic perspective with the successful passage of the so-called ObamaCare Bill. Paradoxically, Harry Reid’s wife was in hospital at the time, having broken her back in a car accident. Reid took over as Senate Majority leader from Republican Bill Frist who retired from politics in 2007. Reid was replaced in 2015 by Republican Mitch McConnell.

53. Activity at a comic con : COSPLAY

“The Mikado” is a wonderful comic opera by Gilbert and Sullivan that is set in the exotic location of Japan. “Mikado” is a word formerly used for the “Emperor of Japan”. In the story, Nanki-Poo is the Mikado’s son, who falls in love with Yum-Yum.

“The Merry Widow” is an operetta composed by Franz Lehar. It is a comic piece about a rich widow and the attempts by her countrymen to marry her off in order to keep her fortune in the poverty-stricken Grand Duchy of Pontevedro. “The Merry Widow” was first performed in 1905 and has been popular ever since.

61. What sharks take interest in : USURY

Populism is a political doctrine that appeals to the masses, usually playing off the interests of the elite.

10. Dangling part of a turkey : WATTLE

A wattle is that ugly (at least I think it’s ugly) appendage hanging below the neck of some birds, like say a turkey.

Edward Gibbon was an English historian who wrote the 6-volume work “The History of the Decline and Fall of the Roman Empire”.

14. Event in which the Four Questions are read : SEDER

The internal organs and entrails of a butchered animal is referred to as “offal”. Examples of dishes that make use of offal would be sausages, foie gras, sweetbreads and haggis. The term is a melding of the words “off” and “fall”, and dates back to the 14th century. The idea is that offal is what “falls off” a butcher’s block.

24. Like landscape paintings that focus more on color and lighting than fine detail : TURNERESQUE

J. M. W. Turner was an English painter who is best known for his watercolor landscapes. Turner had an uncanny ability to portray light in his works, earning him the moniker “the painter of light”.

The Carolina Panthers are the NFL team based in Charlotte, North Carolina.

Haywire is wire used to bind bales of hay. Haywire is very springy, and coils of the wire are difficult to keep under control. That characteristic gives us the informal meaning of “haywire”, namely “erratic, crazy”.

“Lachrymose” means “teary”, from the Latin “lacrima”, the word for “tear”.

“Bucko” was originally a nautical term of address. It dates back at least to 1883 when it referred to a cocky, swaggering sort of guy.