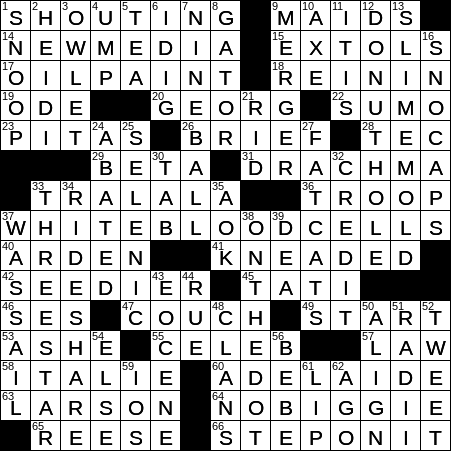 9. Octet in “The Twelve Days of Christmas” : MAIDS

The von Trapps portrayed in the musical “The Sound of Music” were a real family, as is well known. In the musical and film, the eldest daughter is “Liesl”, although in real life her name was Agathe. Agathe came with her family to the US in 1938, and operated a private kindergarten in Baltimore, Maryland for 35 years. Agathe passed away in 2010.

“Rikishi” is the term used for a sumo wrestler. “Rikishi” translates from Japanese as “strong man”.

Baba ghanoush (also “baba ghanouj”) is an Arab dish with the main ingredient of mashed eggplant. It is sometimes served as a (delicious) dip.

The Greek drachma was in use until it was replaced by the euro in 2002. As well as being Greece’s currency in modern times, the drachma was also used in ancient Greece.

White blood cells protect the body against infection and are part of the immune system. They are formed in the bone marrow and are found mainly in the blood and lymphatic systems. White blood cells are also known as leukocytes, from the Greek “leuko-” meaning “white”.

40. Who said “There’s only one Elizabeth like me, and that’s the queen” : ARDEN

Jacques Tati was a very famous filmmaker and comic actor in his homeland of France. Even though he only directed six feature-length movies, Tati is often cited by insiders as one of the greatest movie directors of all time.

“Ses” is the French word for “his”, “her” or “its”, when referring to a group of items or individuals.

65. Older brother of Malcolm on “Malcolm in the Middle” : REESE

I’ve never actually sat down and watched the TV comedy “Malcolm in the Middle”. It ran on Fox from 2000 to 2006. Malcolm was played by Frankie Muniz, who gave up acting to pursue a career in motor racing.

3. Young prey for a bobcat : OWLET

5. Break during a cricket match : TEA

25. Pertaining to the moon : SELENIC

The Battle of Rivoli was a 1797 victory for the French, led by Napoleon Bonaparte, over the Austrians. The battle took place at Rivoli Veronese, a commune in the north of Italy. The famous Rue de Rivoli that passes alongside the Louvre Palace in Paris is named for the battle.

50. What a politician’s promises and actions should do : ALIGN

We live in hope …

59. Neighbor of the island Santorini : IOS