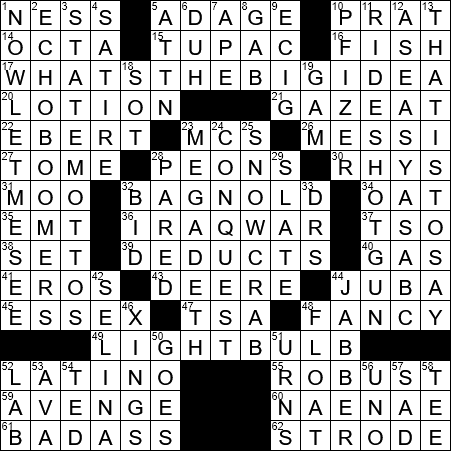 Constructed by: Erik Agard & Bruce Haight
Edited by: Will Shortz

We have a mini-theme today related to the LIGHT BULB defined by the black squares in the center of the grid:

5. Many a line from Benjamin Franklin : ADAGE

“Awake in the Dark” is a collection of essays by film critic Roger Ebert that was published in 2006. Subtitled “The Best of Roger Ebert”, the essays were selected from his writings over his 40-year career.

“National Velvet” is a novel by Enid Bagnold that was first published in 1935. The story centers on Velvet Brown, a 14-year-old girl who rides her own horse to victory in the most celebrated of English horse races, the Grand National steeplechase. A famous film adaptation of the story was released in 1944 starring a young Mickey Rooney and 12-year-old Elizabeth Taylor in the title role. After filming was completed, Taylor was given the horse that she rode as a gift for her birthday.

41. Relative of philia and agape, to the Greeks : EROS

The ancient Greeks at least four words for “love”, namely

Juba is a city on the White Nile in Africa and the capital of the Republic of South Sudan.

47. Provider of a traveler’s check, for short : TSA

49. Item suggested visually by the black squares in this puzzle’s grid : LIGHT BULB

“Deportes” is Spanish for “sports”.

2. Millennials, in relation to their parents : ECHO BOOMERS

Several US states have single-word mottos:

The Big Four of thrash metal were Metallica, Slayer, Anthrax and Megadeth. I have no idea what thrash metal is …

Catwoman, the alter ego of Selina Kyle, is a supervillain who is usually depicted as an adversary of Batman in comics. In the sixties television show “Batman”, Catwoman was first portrayed by actress Julie Newmar, but then the more memorable Eartha Kitt took over, with the marvelously “feline voice”. On the big screen, Catwoman has been played by Lee Meriwether in “Batman” (1966), by Michelle Pfeiffer in “Batman Returns” (1992), by Halle Berry in “Catwoman” (2004) and by Anne Hathaway in “The Dark Knight Rises” (2012).

46. Places for pedestrians to be alert, informally : XINGS

International Space Station (ISS) is a modular facility that comprises components launched into space by Russian Proton and Soyuz rockets, and by American Space Shuttles. The station has been occupied by astronauts and scientists continually since November, 2000.

53. DuVernay who directed “A Wrinkle in Time” : AVA