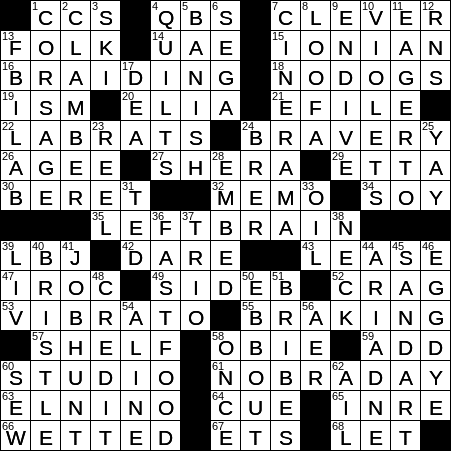 In honor of NO BRA DAY, themed answers need the letters BRA removed in order to make sense:

The Ionian Sea is that part of the Mediterranean lying between Greece and the southern part of Italy (under the sole of the “boot”). The Ionian Sea is one of the most seismically active regions on the planet.

Charles Lamb was an essayist and poet from England. Lamb’s best-known works are “Essays of Elia” (1823) and “Tales from Shakespeare”, an 1807 children’s book that he co-authored with his sister Mary Lamb.

26. Pulitzer Prize winner for “A Death in the Family” : AGEE

The singer Prince was born in Minneapolis, and he lived there most of his life. Born Prince Rogers Nelson, his given name honored his father, a jazz musician who used the stage name Prince Rogers. Prince died in 2016 due to an accidental fentanyl overdose at his home and recording studio located just southwest of Minneapolis. The home and studio, known as Paisley Park, is now a museum that is open to the public.

Soy sauce is made by fermenting soybeans with a mold in the presence of water and salt. Charming …

President Lyndon Johnson (LBJ) is one of only four people to have held all four elected federal offices, namely US Representative, US Senator, US Vice-President and US President. As President he is perhaps best remembered for escalating involvement in the Vietnam War, and for his “Great Society” legislation.

That would be “Truth or Dare”.

Those would be songs by the Beatles.

No Bra Day has been observed annually since 2011. Originally observed on July 9th, the day was moved to October 13th in 2014, so that it falls in the middle on National Breast Cancer Awareness Month.

“Corsage” is a word that we imported from French in the late 15th century and meaning , believe it or not, “body size”. By the early 1800s, a corsage was a bodice, or the body of a woman’s dress. At the beginning of the 20th century, the French term “bouquet de corsage” was being used for a “bouquet worn on the bodice”, and this has been shortened simply to “corsage”.

Cinerama is a widescreen format that was introduced in some theaters in the fifties. A Cinerama screen is very curved, and it takes three movie projectors operating simultaneously to provide the full image.

The FBI Academy is located on a Marine Corps base in Quantico, Virginia. The academy opened for the first trainees in 1972. Included in training complex is a 10-acre mock city known as Hogan’s Alley.

28. Journalist in a military unit : EMBED

31. Colleague of Mary, Murray and Lou on “The Mary Tyler Moore Show” : TED

Ted Knight was the actor best known for playing the slow-witted news anchor Ted Baxter on “The Mary Tyler Moore Show”. Knight’s most famous role on the big screen was Judge Elihu Smails in the 1980 comedy “Caddyshack”.

In Greek mythology, Ariadne was the daughter of Minos, the King of Crete and master of the Minotaur. Minos charged his daughter with control of the labyrinth that housed the Minotaur. However, Ariadne fell in love with Theseus who had vowed to kill the Minotaur, and she helped him fulfill his mission. In other myths, Ariadne became the bride of the god Dionysus.