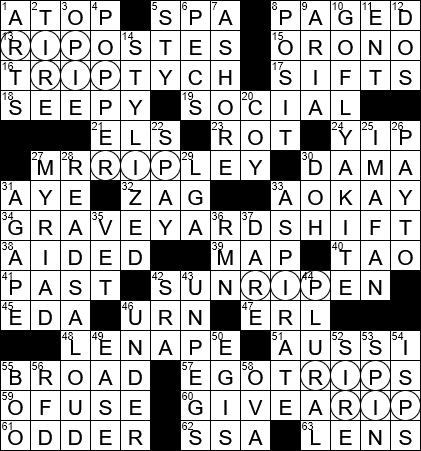 Themed answers include the initialism RIP (for “rest in peace”) shown in circled letters. Those RIPs, found so often in a GRAVEYARD, SHIFT from left to right as we progress down the grid:

5. Place to get pampered : SPA

Back in the late 1500s. The verb “to pamper” meant “to cram with food”. Over time, the usage evolved into meaning “to overindulge”.

“Riposte” is a fencing term, one describing a quick thrust after having parried a lunge from one’s opponent. We also use to the term to mean a sharp verbal retort.

American novelist Patricia Highsmith was noted for her psychological thrillers, some of which were adapted for the big screen. For example, Alfred Hitchcock’s 1951 film “Strangers on a Train” was based on her 1950 novel of the same name. The more recent movie, “The Talented Mr. Ripley” released in 1999, was adapted from her 1955 novel with the same title.

Our term “A-OK” is supposedly an abbreviation for “A(ll systems are) OK”, and arose in the sixties during the Space Program.

34. Late night for a working stiff … or a hint to the shaded squares : GRAVEYARD SHIFT

The author Benjamin Hoff is best known for his 1982 book “The Tao of Pooh”, and a successor title published in 1992 called “The Te of Piglet”. Both books use the “Winnie the Pooh” stories to illustrate Taoist beliefs.

“What’s past is prologue” is a quotation from William Shakespeare’s “The Tempest”. In the play, the words suggest that what’s past is past, and the future is something different, something that we can control. Our contemporary usage of the phrase is almost exactly the opposite: understanding the past is of great importance in setting the stage for the future.

Eda LeShan wrote several nonfiction books including “When Your Child Drives You Crazy” and “The Conspiracy Against Childhood”. LeShan was also host of the PBS television show “How Do Your Children Grow?”

“Der Erlkönig” (“The Erl King”) is a poem by the German writer Johann Wolfgang von Goethe. The poem tells of the death of child attacked by the Erl King, a supernatural being. The Austrian composer Franz Schubert made a musical adaptation of Goethe’s poem using the same title.

The Lenape Native American people lived along the Delaware River when Europeans first landed in the Americas. As a result of the enforcement of the Indian Removal Act 1830, most Lenape now live in Oklahoma, with significant numbers also in Wisconsin and Ontario.

Firestone is a tire company that was founded by Harvey Firestone in 1900. The Firestone company took off when it was selected by Henry Ford as the supplier of tires for his Model T.

To posit is to assume as fact, to lay down as a “position”.

“P!nk” is the stage name of American singer Alecia Beth Moore. I known so little about “modern” music, but I do like the P!nk song “Just Give Me a Reason” …

“To aspirate” is to pronounce a letter or word with an initial release of the breath, as in the word “hey”.

The phrase “six feet under” means “dead and buried”. Six feet is the traditional depth of a grave.

54. Comcast Xfinity and others, in brief : ISPS

In vitro fertilization is the process in which egg cells are fertilized by sperm cells outside of the body in vitro. The phrase “in vitro” translates from Latin as “in glass”. The process is usually carried out in a glass culture dish.