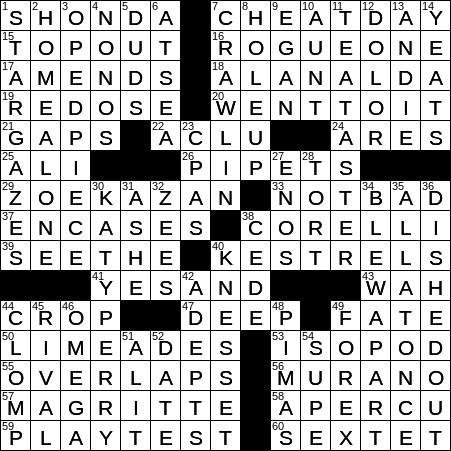 22. Org. that might take the government to court : ACLU

26. Means of drawing up solutions : PIPETS

The actress Zoe Kazan is a granddaughter of famed film and theater director Elia Kazan.

The name kestrel applies to several different types of falcon. What distinguishes kestrels from other falcons is their behavior. Kestrels hover when hunting, at 50-60 feet above the ground, and then swoop down when they spot their prey.

The word “metaphysics” comes from the Greek “meta” (beyond) and “physika” (physical). Metaphysics is a branch of philosophy that investigates reality beyond the principles of science. Not something I would understand …

Isopods are small crustaceans (meaning they have exoskeletons), with seven pairs of legs. Examples would be woodlice and pill bugs. The name “isopod” comes from the Greek “iso” (same) and “pod” (foot). All isopods have seven pairs of jointed limbs.

Belgian artist René Magritte was a surrealist. His most recognized work maybe is “The Son of Man”, a painting he created as a self-portrait. It is the work that shows a man in a bowler hat with his face covered by an apple. The image features prominently in a great movie, the 1999 remake of “The Thomas Crown Affair”.

An apercu is a first view, a glance. By extension, the term “apercu” can also be used for a detached view, an overview or a short synopsis. “Aperçu” is French for “perceived”.

2. Hit movie with the tagline “A family comedy without the family” : HOME ALONE

9. Jennifer who wrote the Pulitzer-winning “A Visit From the Goon Squad” : EGAN

Andie MacDowell is an American actress who seems to turn up in quite a few British productions set in that part of the world. Most famously she was the love interest in the fabulous film “Four Weddings and a Funeral” starring opposite Hugh Grant. I also enjoyed another of her movies, “Groundhog Day”, which is a fun tale set back here in the US.

A Diet was a general assembly of the estates of the former Holy Roman Empire. The most famous of these assemblies was the Diet of Worms, a 16th-century meeting that took place in the small town of Worms on the Rhine River in Germany. The main item on the agenda was discussion of the 95 theses of Martin Luther. Luther was summoned to the meeting, and there found to be guilty of heresy and so was subsequently excommunicated by the Pope.