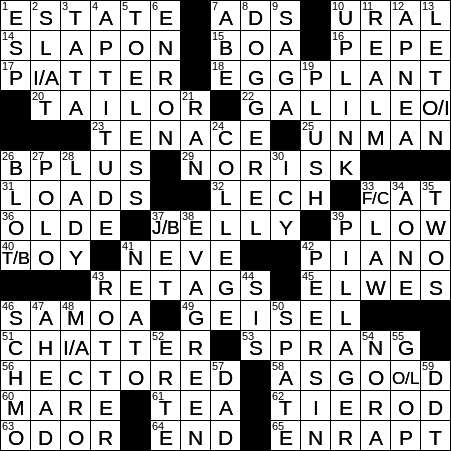 Several across-answers alliterate, and use two letters to make two words. Either letter works in the corresponding down-answers:

10. River past Orsk and Orenburg : URAL

The Ural River rises in the Ural Mountains in Russia and flows for half its length through Russian territory until it crosses the border into Kazakhstan, finally emptying into the Caspian Sea. It is the third-longest river in Europe, after the Volga and Danube.

In the wonderful card game of bridge, a tenace is a broken sequence of honor cards, like AQ or KJ.

Lech Walesa worked as an electrician in the Gdansk Shipyards in Poland. Walesa was active in the trade union movement in the days when unions were not welcome behind the Iron Curtain. His efforts resulted in the founding of Solidarity, the first independent trade union in Soviet-controlled territory. For his work, Walesa was awarded the Nobel Peace Prize in 1983, and in 1990 he became the first democratically elected President of Poland. He has lost support in Poland in recent years, but he is a very popular booking on the international speaking circuit.

The Jelly Belly Candy Company is located not far from where I live in California. My son has toured the factory with his girlfriend and tells me its a great way to spend a few hours, if you’re in the area …

Neve Campbell is a Canadian actress whose big break in movies came with the “Scream” horror film series, in which she had a leading role. I don’t do horror films, so I haven’t seen any of the “Scream” movies. Nor have I seen the TV series “Party of Five” which launched the acting careers of both Campbell and Jennifer Love Hewitt in the nineties.

The verb “to hector” means “to bully, to dominate in a blustering way”. The term comes from the Trojan hero Hector, who encouraged his fellow Trojans to keep up the fight against the Greeks.I guess he must have bullied them …

The Moon’s Mare Tranquillitatis (Latin for “Sea of Tranquility”) was named in 1651 by astronomers Francesco Grimaldi and Giovanni Battista Riccioli. Famously, the first manned landing on the Moon was in the Sea of Tranquility, when the Apollo 11 Lunar Module named Eagle touched down there in 1969. However, the first man-made vehicle to reach the Sea of Tranquility arrive four years earlier. the Ranger 8 spacecraft was deliberately crashed there in 1965, sending back thousands of photographs to Earth in the last 23 minutes of its mission.

Tie rods are part of a rack and pinion steering mechanism in a car.

Enron Field, as it was known, is a retractable-roof ballpark that was built next to Houston’s old Union Station. Enron paid $100 million to get its name on the field, and then when the world found out what a scam Enron actually was, the Astros bought back the contract for the name, for a mere $2.1 million. The stadium became Astros Field for a few months, until the Coke people paid $170 million for a 28-year contract to rename the stadium Minute Maid Park. A good deal for the Astros, I’d say.

8. Writing on many a greeting card : DOGGEREL

An Ironman Triathlon is a race involving a 2.4 mile swim, a 112 mile bike ride, and a marathon run of just over 26 miles. The idea for the race came out of a debate between some runners in the 1977 Oahu Perimeter Relay. They were questioning whether runners, swimmers or bikers were the most fit athletes. The debaters decided to combine three local events to determine the answer, inviting athletes from all three disciplines. The events that were mimicked to come up with the first triathlon were the Waikiki Roughwater swim (2.4 miles), the Around-Oahu Bike Race (115 miles) and the Honolulu Marathon (26.2 miles). The idea was that whoever finished first would be called “the Iron Man”. The first triathlon was run in 1978, with fifteen starters and only twelve finishers. The race format is used all over the world now, but the Hawaiian Ironman is the event that everyone wants to win.

27. Explorer whose name is a sport : POLO