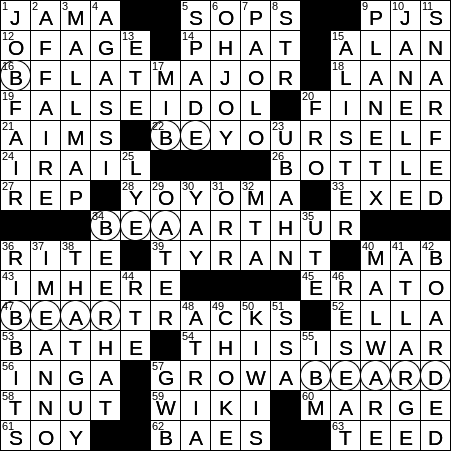 Themed answers include a word in circled letters that form a sequence that grows from B to BEARD:

9. Attire that may include covering for the feet, in brief : PJS

52. Fitzgerald known as the Queen of Jazz : ELLA

Inga Swenson is an American actress. Her best known role was “Gretchen Kraus”, the German cook and later housekeeper on the TV show “Benson”. Swenson also appeared in a couple of episodes of “Bonanza” playing the second wife of Ben Cartwright (Lorne Greene), and mother of Hoss Cartwright (Dan Blocker). This was despite the fact that in real life, she was actually 4 years younger than Blocker!

“Affaire de coeur” is French for “love affair”, literally “love of the heart”.

Pete Sampras is a retired Greek-American tennis professional. Sampras was rated number one in the world rankings for six years in a row in the nineties.

9. Hypothetical body in the solar system beyond Neptune : PLANET X

The astronomer Percival Lowell spent decades searching for what was known as Planet X. Planet X was a hypothetical body in solar system that would explain deviations in the orbits of Uranus and Neptune (a hypothesis later shown to be false). His work is known to have led to the discovery of Pluto in 1930, 14 years after Lowell died.

“Hidden Figures” is an excellent 2016 film based on a book of the same name by Margot Lee Shetterly. Both book and film tell the story of female African American mathematicians who worked for NASA during the Mercury and Apollo programs in the 1960s.

“U-Bahn” is the name given to the underground train system in several cities around Germany including Berlin, Hamburg, Munich and Nuremberg.

Bobby Orr is regarded as one of the greatest hockey players of all time. By the time he retired in 1978 he had undergone over a dozen knee surgeries. At 31 years of age, he concluded that he just couldn’t skate anymore. Reportedly, he was even having trouble walking. While still 31 years old, in 1979, Orr became the youngest person inducted into the Hockey Hall of Fame.

In modern architecture an atrium (plural “atria” or “atriums”) is a large open space usually in the center of a building and extending upwards to the roof. The original atrium was an open court in the center of an Ancient Roman house. One could access most of the enclosed rooms of the house from the atrium.