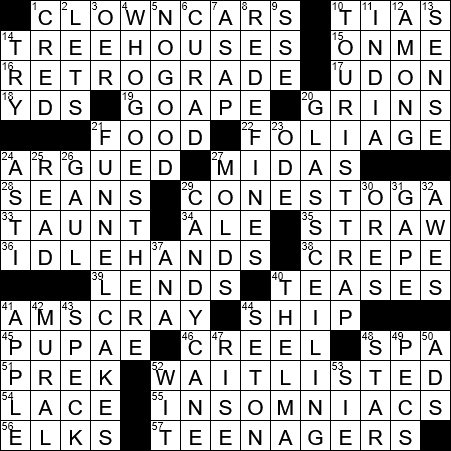 A Conestoga is a large covered wagon that was used in many of the wagon trains that crossed North America in the late 1700s and early 1800s. The name was taken from the Conestoga Valley near Lancaster, Pennsylvania where the design was developed. The Conestoga wagon resembled a boat on wheels, and often the gaps between the planks were caulked so that it would float when crossing water.

Old Speckled Hen is a very tasty English beer, and a favorite of mine. It was first brewed in Abingdon-on-Thames to commemorate the 50th anniversary of the local MG car factory. There are colorful stories that link the name “Old Speckled Hen” to the MG plant, but I’m not sure which to believe. I would drink the beer regardless …

The pupa is an intermediate stage in the development of an insect. All four stages are embryo, larva, pupa and imago.

The word “spa” migrated into English from Belgium, as Spa is the name of a municipality in the east of the country that is famous for its healing hot springs. The name “Spa” comes from the Walloon word “espa” meaning “spring, fountain”.

54. Something found near the tongue? : LACE

That would be a shoe.

55. Ones who find it difficult to go out? : INSOMNIACS

Our word “insomnia” ultimately comes from the Latin prefix “-in” meaning “not” and “somnus” meaning “sleep”.

56. Group whose past members have included six U.S. presidents : ELKS

57. Much of Generation Z, today : TEENAGERS

Definitions vary, but it seems that the term “Generation Z” is reserved for the children of “Generation X”.

A reprobate is a depraved or unprincipled person, and in particular is a lost soul, one rejected by God.

Times Square in New York City isn’t a square at all, but rather a triangle. When the New York Times newspaper opened new headquarters in the area in 1904, the city agreed to the name “Times Square”, changing it from Longacre Square.

Funnel cake is a traditional serving at American carnivals and seaside resorts. The cake is made by pouring cake batter from a funnel into hot cooking oil in a circular pattern, and then deep frying until it is golden-brown.

48. Competitor of Us Weekly : STAR

“Star” magazine is a celebrity tabloid that was introduced by Rupert Murdoch in 1974 as a potential competitor to “National Enquirer”. A regular feature in “Star” gossips about suspected plastic surgeries under the title “Knifestyles of the Rich and Famous”. I wouldn’t be a fan of celebrity magazines, but that “Knifestyles …” name, that’s funny …

At one point in William Shakespeare’s play “Romeo and Juliet”, Mercutio says to Romeo:

Thy wit is a very bitter sweeting. It is a most sharp sauce.