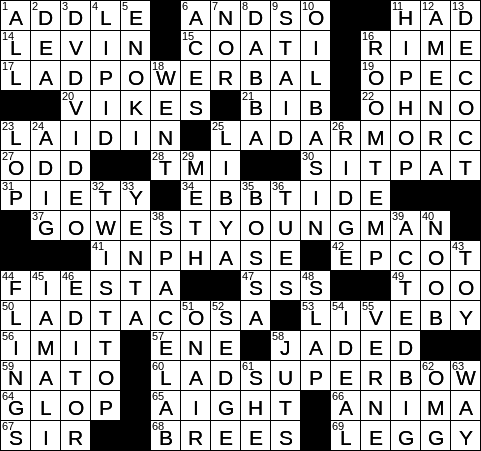 Themed answers are phrases that end with the letters LAD. But, we take that LAD (YOUNG MAN) and move him to the start of the answer (GO WEST):

As well as writing novels, Ira Levin was a dramatist and a songwriter. Levin’s first novel was “A Kiss Before Dying”, and his most famous work was “Rosemary’s Baby” which became a Hollywood hit. His best known play is “Deathtrap”, a production that is often seen in local theater (I’ve seen it a couple of times around here). “Deathtrap” was also was a successful movie, starring Michael Caine and Christopher Reeve. My favorite of Levin’s novels though are “The Boys from Brazil” and “The Stepford Wives”.

“The Stepford Wives” is a 1972 novel by Ira Levin about a Connecticut community in which the husbands replace their wives with docile robots. There have been two film adaptations of the book, the first released in 1975 and starring Katharine Ross (my favorite). The second movie adaptation, released in 2004, isn’t as good in my opinion, although although Bette Midler plays a great supporting role.

17. Many a hit by Def Leppard : POWER BALLAD

The use of the hashtag #MeToo was encouraged initially by actress Alyssa Milano in 2017 to draw attention to sexual assault and sexual harassment. Milano’s was acting in response to the growing number of allegations against film producer Harvey Weinstein. The use of the phrase “Me Too” in the context of sexual misconduct dates back to 2006. Social activist Tarana Burke started to use the phrase on the Myspace social network after a 13-year-old girl told her that she had been sexually assaulted. Apparently, Burke had no response at the time the girl confided in her, but later wished she had responding, “Me too”.

Montenegro is a country in Southeastern Europe that once was part of Yugoslavia. “Montenegro” is a historical Italianate translation of “black mountain”.

66. Part of the unconscious : ANIMA

Drew Brees is a quarterback for the New Orleans Saints. On top of his success in the NFL, when he was a youth Brees was an excellent tennis player. In one competition he actually beat a young Andy Roddick who later became the world’s number one.

Lipids are a groups of naturally occurring molecules including fats, waxes and fat-soluble vitamins (like A, D and E). Sometimes we use the words “fat” and “lipid” interchangeably but fats are a subgroup of lipids, specifically a group best called triglycerides.

The Air Medal is a US military decoration that was created in 1942 in an executive order signed by President Franklin D. Roosevelt. The Air Medal is awarded for acts of heroism or merit in aerial flight.

To decoct is to extract the flavor of a liquid by boiling down and increasing the concentration. A related term is “to concoct”, meaning “to boil together”. We use the verb “to concoct” in figurative sense to mean to contrive, devise.

Benghazi is the second largest city in Libya, after the capital Tripoli. It is a port city lying on the Mediterranean Sea.

“Meth” is a street name used for the drug methamphetamine, which is also called “crank” and “crystal meth”.

Spacelab was a modular science laboratory that was carried in the cargo bay of 32 Space Shuttle missions from 1981 until 2000. It was designed and constructed by 10 European nations with funds from the European Space Agency (ESA), with NASA providing ground facilities and managing Space Shuttle flights.

The actor Verne Troyer was best known for playing the character Mini-Me in the “Austin Powers” series of films. Troyer suffered from a form of dwarfism, and at a height of only 2 ft 8 in was one of the shortest men in the world.