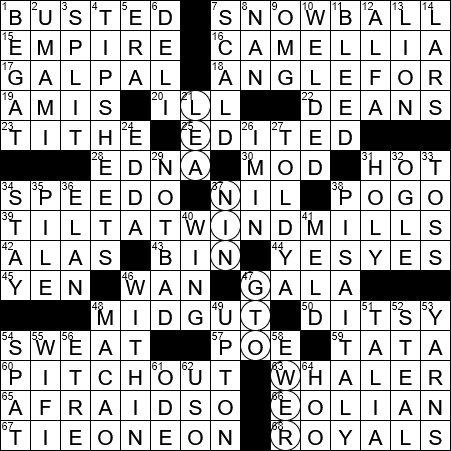 The circled letters running down the middle of the grid suggest visually, and spell out, “LEANING TOWER”, as found in PISA, ITALY. There are also some answers throughout the puzzle that start with a synonym of “LEAN”:

The Camellia is the state flower of Alabama, but “the Camellia City” is Sacramento, the state capitol of California.

Kingsley Amis (what a great name!) was a very successful English writer, famous for producing entertaining, comedic novels. His most famous novel probably is his first, “Lucky Jim” published in 1954. That said, he won a Booker Prize for a later novel, “The Old Devils” published in 1986. He passed on some of his talent through his genes, it seems, as his son Martin Amis is a very successful novelist too.

28. Woman’s name that’s an anagram of a European native : EDNA

The word “nothing” translates to “nada” in Spanish.

“Pogo” is a comic strip that was launched in 1948, and was the creation of cartoonist Walt Kelly. The story centers on animals that live in the Okefenokee Swamp on the Georgia-Florida border, with the title character “Pogo Possum” being an anthropomorphic opossum.

The phrase “tilting at windmills” means “attacking imaginary enemies”. The idiom comes from an episode in the novel “Don Quixote” by Miguel de Cervantes, in which the hero of the piece charges at windmills that he imagines are giants.

“The Cask of Amontillado” is a short story by Edgar Allan Poe that was first published in 1846. The story tells of a vengeful man who lures his enemy into the catacombs, locks him in chains and then traps him in a niche by sealing it with a brick wall. Nice man …

In ten pin bowling, a split takes place when the number-one pin (headpin) is a knocked down with the first ball and two or more non-adjacent pins are left standing. The most difficult split to deal with is the infamous 7-10 split, where just the rear pins at the extreme right and left remain standing.

Lars von Trier is a film director and screenwriter from Denmark. Even though there is lot of demand for von Trier to work all over the world, the vast majority of his films are shot in Denmark or Sweden, even movies set in the US. That’s because von Trier has an intense fear of flying.

38. Home to this puzzle’s featured structure, as hinted at by the starts of the answers to the starred clues : PISA, ITALY

Gin rummy is a variant of the slower game known as standard rummy. It was introduced in 1909 by one Elwood Baker and his son.

Kate Upton is a fashion model from St. Joseph, Michigan. Kate is a niece of US Representative Fred Upton of Michigan.

The actress Talia Shire is best-known for playing Rocky’s wife Adrian in the “Rocky” series of movies. She also played Connie, the daughter of Don Corleone, in “The Godfather” films. Shire is the sister of movie director Francis Ford Coppola and the aunt of actor Nicolas Cage. Her son is the actor Jason Schwartzman.

62. Nonprofit grp. that works with the Defense Department : USO