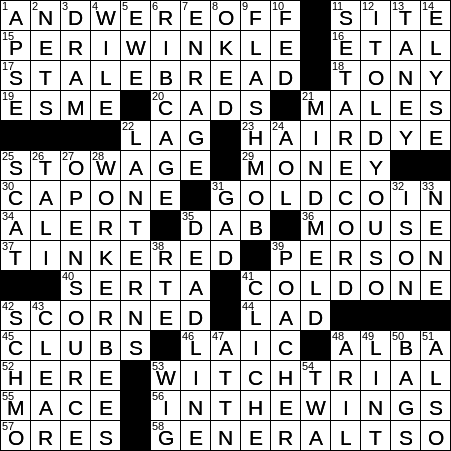 15. Purple-blue shade or the flower it’s named after : PERIWINKLE

Vinca is a plant genus with six species all native to Europe, Africa and Asia. Vincas are vine-like in their growing behavior, which explains the name “vinca” as “vincire” is Latin for “to bind”. Vinca is often referred to as “periwinkle” in English.

The Chicago gangster Al Capone was eventually jailed for tax evasion. He was given a record 11-year sentence in federal prison, of which he served 8 years. He left prison suffering dementia caused by late-stage syphilis. Capone suffered through 7-8 sickly years before passing away in 1947.

When I was a kid, Speedy Gonzales was one of my favorite cartoon characters. He was billed as “The Fastest Mouse in all Mexico” and tore around the place yelling “¡Ándale! ¡Ándale! ¡Arriba! ¡Arriba! ¡Epa¡ ¡Epa! ¡Epa! Yeehaw!”

“Family Ties” was one of the first TV shows that I enjoyed when I arrived in the US back in 1983. I found the situation very appealing, with two ex-hippie parents facing off against an ultra-conservative son. The main characters in the show were Michael J. Fox as Alex, Meredith Baxter-Birney as Alex’s mom Elyse, and Michael Gross as Alex’s dad Steven. Some future stars had recurring roles as well, including Courteney Cox as one of Alex’s girlfriends and Tom Hanks as Elyse’s young brother.

Mr. Spock was the first to show us the Vulcan mind meld, on the original “Star Trek” series. Vulcans have the ability to meld with the minds of other Vulcans, and indeed humans, in order to see what what’s “going on” in the other individual’s mind.

Vulcans are an alien race in the “Star Trek” franchise. The most famous (half) Vulcan is Spock, played by Leonard Nimoy. Spock’s father is a Vulcan, and his mother is human.

A queen bee has a stinger, just like worker bees. When a worker bee stings, it leaves it stinger in its victim. The worker bee dies after losing its stinger as the loss rips out part of its insides. However, a queen bee can sting with impunity as her stinger’s anatomy is different.

33. State bird whose name sounds like its call : NENE

“Scroggin” and “schmogle” are names used for “trail mix” in New Zealand.

“Sap” is slang for “fool, someone easily scammed”. The term arose in the early 1800s in Britain when it was used in “saphead” and “sapskull”. All these words derive from “sapwood”, which is the softwood found in tree trunks between the bark and the heartwood at the center.

Lint”, meaning “fluff”, is one of those terms that I had to learn when I moved to the US. We call the same thing “fuzz” on the other side of the pond …

Eastern Air Lines was around from 1926 until 1991. The company was purchased in 1938 by Eddie Rickenbacker, who was a WWI flying ace. Under Rickenbacker’s leadership, Eastern were very successful. However, the airline couldn’t cope with a strike, high fuel prices and deregulation in the nineties, so Eastern went bankrupt in 1991.