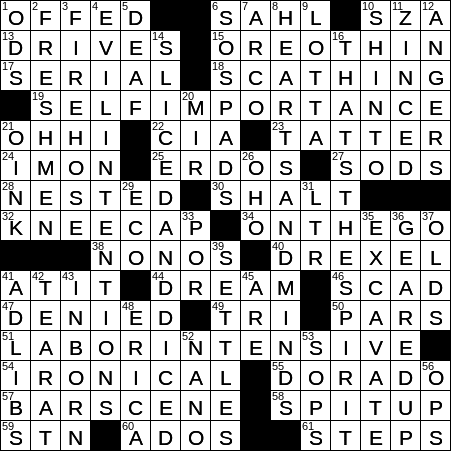 Constructed by: Lewis Dean Hyatt
Edited by: Will Shortz

Mort Sahl is a Canadian-born actor and comedian who moved to the US with his family when he was a child. Sahl became friends with John F. Kennedy. When Kennedy became president, Sahl wrote a lot of jokes for the President’s speeches, although he also told a lot of Kennedy jokes in his acts. After the President was assassinated in 1963, Sahl was intensely interested in finding out who was behind the crime and even got himself deputized as a member of one of the investigating teams. He was very outspoken against the results of the Warren Commission report on the assassination, and soon found himself out of favor with the public. It took a few years for him to make his comeback, but come back he did.

“Charlie Wilson’s War” is an excellent 2007 movie written by my favorite screenwriter, Aaron Sorkin. The film tells the true story of US Congressman Charlie Wilson who was instrumental in supporting local militia during the Soviet War in Afghanistan. Tom Hanks plays the title role, with Julia Roberts and Philip Seymour Hoffman also starring. Hoffman’s plays a maverick CIA agent named Gust Avrakotos, and my favorite character in the movie …

Paul Erdős was a famous Hungarian mathematician, and a very prolific writer. Erdős published more papers than any other mathematician in history.

A sesamoid bone is one embedded within a tendon or muscle. Such bones provide a smooth surface over which the tendon or muscle can slide freely, in the same way that a rope slides over a pulley. The largest example of a sesamoid bone in the human body is the patella, the kneecap. Most sesamoid bones are very small, which explains why the name comes from the Latin “sesamum” meaning “sesame seed”.

Drexel University is a private school in Philadelphia, but with a campus in Sacramento. It was founded in 1891 by philanthropist Anthony J. Drexel who was a Philadelphia financier. The school was originally known as the Drexel Institute of Art, Science and Industry.

“Mahi-mahi” is the Hawaiian name for the dolphin-fish, which is also called the dorado. The mahi-mahi is an ugly looking creature if ever I saw one …

Penn Station in New York City may have been the first Pennsylvania Station, but it’s not the only one. The Pennsylvania Railroad gave that name to many of its big passenger terminals, including one in Philadelphia (now called 30th Street Station), one in Baltimore, one in Pittsburgh, one in Cleveland, as well as others.

Brillo Pad is a soapy, steel wool pad, patented in 1913. The company claims that the name “Brillo” is derived from the Latin word for “bright”.

7. Counterpart of pizzicato, in music : ARCO

The Russian Mir space station was a remarkably successful project. It held the record for the longest continuous human presence in space at just under 10 years, until the International Space Station eclipsed that record in 2010. Towards the end of the space station’s life however, the years began to take their toll. There was a dangerous fire, multiple system failures, and a collision with a resupply ship. The Russian commitment to the International Space Station drained funds for repairs, so Mir was allowed to reenter the Earth’s atmosphere and burn up in 2001. “Mir” is a Russian word meaning “peace” or “world”.

“You Are” was a 1983 hit for Lionel Richie. Richie co-wrote “You Are” with his wife at that time, Brenda Harvey Richie.

48. Woman’s name that rhymes with a part of the world : ERICA

Amerigo Vespucci was an Italian explorer. Vespucci was the man who established that the landmass discovered by Christopher Columbus was not the eastern coast of Asia, but rather was a “New World”. The newly-discovered supercontinent was named “America”, coming from the Latin version of Vespucci’s first name “Amerigo”.