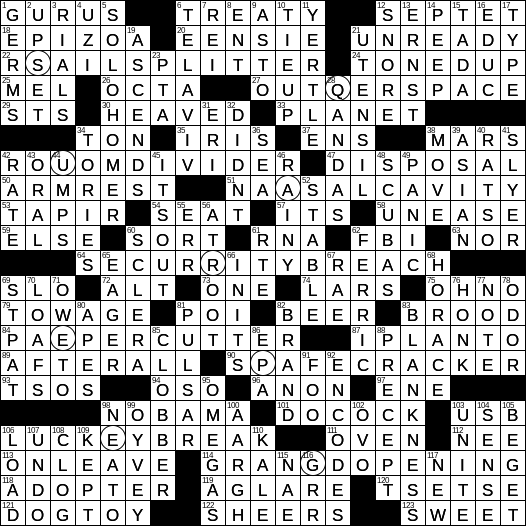 22. Another nickname for Old Abe … or a description of the circled letter? : RAILSPLITTER

Before Abraham Lincoln was elected president, his political campaign used the nickname “Rail-Splitter” to emphasize the candidate’s humble upbringing. Lincoln had worked at splitting fence rails in his youth.

Rial is the name of the currency of Oman (as well as Yemen, Iran, Cambodia and Tunisia). Generally, there are 1,000 baisa in a rial.

49. Feeling with a deadline approaching : PANIC

Carbon-14 is a radioactive isotope of carbon that is found in nature in small amounts Carbon-14 is used in the technique known as radiocarbon dating, a relatively accurate way of determining the age of something up to about 60,000 years old. When an organism is alive, the amount of radioactive carbon-14 it has compared to the amount of regular carbon-12, is a fixed ratio. After the organism dies, it is no longer exchanging carbon with the atmosphere through metabolism. So, the stable carbon-12 stays in the body as it rots but the radioactive carbon-14 gradually decays, causing the ratio of carbon-14 to carbon-12 to fall. Scientists can determine the age of remains by measuring this carbon-14/carbon-12 ratio.

US Route 101 runs in the north-south direction along the west coast of the country, through California, Oregon and Washington. US 101 is an important thoroughfare here in the San Francisco Bay Area, but along most of its length, traffic tends to use the parallel Interstate 5.

Something described as ferric contains iron, or is related to iron. “Ferrum” is Latin for “iron”.

Corinne Bailey Rae is a British singer from Yorkshire in the north of England.

68. Poet who originated the phrase “harmony in discord” : HORACE

“Oy vey” is a Yiddish expression of dismay that literally translates as “oh, pain”. The more usual translation is “woe is me”.

Despite the fact that “beget” appears in the English translation of the Bible, the use of “beget” in the sense of procreation only dates back to about 1200 AD. Prior to that, “beget” meant “to acquire, seize”.